Navy to Arm Its Zumwalt-Class Destroyers with Hypersonic Missiles 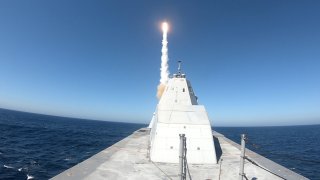 Arming destroyers with hypersonics is a key part of the Pentagon’s plan to increase strike range, attack flexibility, and ability to strike at unprecedented speeds. A destroyer at sea armed with a long-range hypersonic weapon would be in a position to adjust its point of attack quite easily and reposition as needed. During a maritime warfare engagement, for example, a Zumwalt destroyer could theoretically adapt to new intelligence information and change attack locations or add new target information as required by the mission.

The Navy plans to arm the Zumwalt-class destroyers with the emerging CPS were explained in an interesting October 2021 Congressional Research Service Report on Hypersonic Weapons, which says the service expects to deploy the weapon by 2025. The Zumwalt-class destroyers are an interesting first choice to be the first place to integrate the CPS given that the ship is engineered with an entire suite of next-generation technologies intended to change the paradigm for maritime warfare.

One key advantage of the Zumwalt-class is its unprecedented degree of mobile, onboard electrical power. The ship’s electric drive is powered by an Integrated Power System and the platform operates with a 78 Megawatt on-board generator. The extra expeditionary power could help power up and even propel or launch hypersonic weapons from the deck of the ship. It is also likely that a variant of the CPS will be configured to fire from deck-mounted Vertical Launch Systems (VLS) which extend around the periphery of the ship.  This is done by design to enable a ship to preserve its functional offensive firepower in the event that some parts of the ship are damaged in an attack. A concentrated block of condensed VLS next to another might enable an enemy to disable a ship’s firepower with a single strike on a small area of the ship deck.

The Zumwalt-class is also powered by an elaborate Total Ship Computing Environment consisting of millions of lines of code. The advantage is greater integration, information sharing, and mission coordination between otherwise segmented parts of the ship. Fire control computers, for example, can quickly link to pools of data accumulated by targeting sensors, radar, or other kinds of command and control systems.

Yet another reason why the Zumwalt-class may have been chosen to fire the CPS hypersonic weapon could be related to its stealth properties. A surface warship with a much smaller and therefore less distinguishable radar signature might be better-positioned to maneuver into new attack positions without being detected by an enemy.  Attack location flexibility is a significant advantage for ocean warfare as enemies often immediately seek to counterattack to the point of incoming fire. A maritime platform, however, can fire and then maneuver immediately to prevent its attack location from immediately being vulnerable.  A stealthy ship might help obscure a point of attack to an even greater degree, therefore increasing survivability.