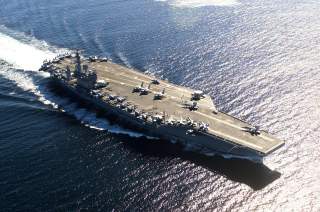 The Navy’s first-of-its-kind carrier-launched F-35C has been conducting aerial maneuvers, weapons integration, “cyclical” flight take-off missions and other war operations from the flight deck of a Nimitz-Class carrier in recent weeks, marking the first operational tests of the stealth fighter slated to deploy in 2021.

“The start of formal operational testing is a milestone more than 18 years in the making,” Vice Adm. Mat Winter, F-35 Program Executive Officer, said in a written statement.  "While aircraft are in operational test, the F-35 Joint Program Office will continue to support the delivery of phased capability improvements and modernization of the air system.”

The combat exercises, which have involved F-35C joint missions with F-18 Super Hornets, E-2D Hawkeye surveillance planes and EA-18G Growler electronic warfare aircraft, were designed to help the Navy prepare for how the introduction of the F-35C will change combat, impact war strategy and drive new concepts of operation.

Missions have included “defensive counter air” and “anti-submarine” warfare, among others,Capt. Matt Norris, from the Joint Strike Fighter Operational Test Team said in a Navy statement earlier this year during Carrier Air Wing assessments on board the USS Abraham Lincoln. Formal Operational Testing has continued into the Fall to ensure the emerging aircraft can fully perform the full range of war operations.

The emergence of a carrier-launched stealth fighter is intended to give the Navy more combat attack flexibility and an improved ability to fight sophisticated enemy air defenses from a sea-based carrier. Such an ability can allow a maneuvering carrier to hold targets at risk from closer proximity if land-bases are far from the combat vicinity. Perhaps of greatest significance, the F-35C brings stealth attack technology to the carrier flight deck for the first time, a circumstance which further enables sea-based attack operations to attack advanced enemy air defenses and function in extremely high-threat environments.

The combat ops, some of which took place off the Eastern shore of the US, heavily emphasized weapons exercises with the F-35C arsenal, which include GBU-32 and GBU-12 air-dropped bombs, AIM-120 and AIM-9x air-to-air missiles and a 25mm cannon. Several tests and assessments have also ensured pilots could properly use night-combat enabled Helmet Mounted Displays designed to provide more fidelity in “low-light” conditions such as those with little or no moonlight.

With a broad wingspan, reinforced landing gear, ruggedized structures and durable coatings, the Navy's F-35C is engineered for harsh shipboard conditions. Its avionics equip the pilot with real-time, spherical access to battlespace information.

Being engineered for a carrier, the F-35C's 51-foot wingspan is larger than the Air Force's F-35A and Marine Corps' F-35B short take-off-and-landing variants. It can fire two AIM-120 air-to-air missiles and two 2,000-pound Joint Direct Attack Munitions. The F-35C can reach speeds up to Mach 1.6 and travel more than 1,200 nautical miles, according to Navy information.

In the future, the F-35C will have an ability to drop a Small Diameter Bomb II - a high-tech weapon now in development able to track and destroy moving targets from great distances using a tri-mode seeker.

The SDB II uses millimeter wave, laser and infrared guidance technology and has now been tested on an F-35, Raytheon developers have explained.

Over the next five years, the Navy plans to acquire as many as 60 or more of the new fighters, Navy officials have told Warrior Maven.

Carrier landing is never easy as pilots must account for the wind-speed, atmospheric conditions and speed of the ship. Navy pilots have explained to Warrior Maven in previous interviews that pilots follow a yellow light on the flight deck of the ship called the Freshnel Lens to help the trajectory of the approach, called their glide slope.

Prior to this Operational Testing, the aircraft has gone through several rounds of testing to advance what’s called carrier integration and carrier qualification – an effort to seamlessly integrate the new aircraft into the carrier platform and carrier air wing, service officials have explained.

Kris Osborn previously served at the Pentagon as a Highly Qualified Expert with the Office of the Assistant Secretary of the Army - Acquisition, Logistics& Technology. Osborn has also worked as an anchor and on-air military specialist at national TV networks. He has a Masters in Comparative Literature from Columbia University.