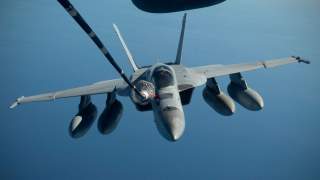 With the canopy missing, Wright was faced with severe windblast and cold temperatures, as well as possible injury from the remaining 10-foot section of refueling hose still attached to the basket.

Taken on Feb. 1, 2002, the main image of the article shows maintenance personnel dispatched from the U.S. Navy aircraft carrier USS John C. Stennis (CVN 74) removing a refueling basket from the refueling probe on an F/A-18 Hornet strike fighter assigned to the “Argonauts” of Strike Fighter Squadron One Four Seven (VFA-147).

The basket became disconnected from a U.S. Air Force (USAF) KC-10 during an in-flight refueling operation, shattering the Hornet’s canopy, during a combat mission in support of Operation Enduring Freedom.

As explained by the U.S. Navy news release, Lt. Cmdr. Anthony Wright of VFA-147 immediately executed the appropriate response: slowing down and bringing the aircraft to an altitude below 12,000 feet.

Meanwhile, an airborne E-2C Hawkeye from the “Golden Hawks” of Carrier Airborne Early Warning Squadron (VAW) 112, with Lt. Nick Marusich as the controller, provided vectors to a forward-operating base and coordinated the divert.

The Hawkeye aircrew also conducted advance contact of the forward-operating base airfield to prepare for the Hornet’s arrival. They contacted the ship, enabling the recovery effort to begin even before the damaged aircraft had landed.

With the canopy missing, Wright was faced with severe windblast and cold temperatures, as well as possible injury from the remaining 10-foot section of refueling hose still attached to the basket. Despite this, he safely flew his Hornet to the airfield, with his wingman, Lt. Greg Brown, providing mutual support and watching for ground threats.

“The main things to be concerned with in this situation are a ruptured eardrum due to rapid loss of cabin pressure; hypoxia due to loss of oxygen; windblast up to 250 miles per hour and frostbite with temperatures in excess of minus 40 degrees Fahrenheit,” said Lt. Sean Skelton, Carrier Air Wing (CVW) 9’s flight surgeon. “Lt. Cmdr. Wright was wearing his oxygen mask, was able to maintain positive control of the aircraft and did not suffer any symptoms of rapid pressure change. A Navy flight surgeon on the ground examined him after he landed and declared him to be in good health.”

“It was extremely cold up there. I felt like I was driving a really expensive convertible at 12,000 feet, at 225 miles per hour. I had to slow the aircraft considerably to stop the hose from beating the aircraft to pieces, and reduce the extreme weather conditions,” said Wright.

A rescue crew was immediately dispatched from USS John C. Stennis (CVN 74), comprised of personnel of the three Hornet squadrons, as well as three civilian technical representatives from the Naval Air Pacific Repair Activity (NAPRA) based in Okinawa, Japan. Upon arrival, the team immediately went to work removing the refueling basket and hose, replacing the canopy and patching more than 20 small holes. A complete “safe-for-flight verification” was conducted in less than four hours from the crews arrival in the forward-operating base. Within 24 hours of the incident, the F/A-18 was back in the air, returning safely to the deck of USS John C. Stennis.

“When we first saw the damage, it was obvious that the pilot did a tremendous job getting that jet down. It took a lot of courage for him not to eject,” said Chief Aviation Electronics Technician (AW) Robert Palmer of Colorado Springs, Colo.

“I felt privileged to be asked to help, and it made me proud that the command had trust in me to assist in fixing the problem,” said Aviation Structural Mechanic (Equipment) (AW) Jitendra Dutt of Hawthorne, Calif.

“Lt. Cmdr. Wright showed amazing poise and ability in his handling of this difficult emergency. His actions were commendable in a perfect environment and absolutely impressive when you factor in the extreme physical hardship of the wind forces and temperatures that he indured for the duration of his flight, ” said Capt. Rolland Thompson, commander of CVW-9. “Equally impressive is the way the John C. Stennis/Airwing 9 team responded to this emergency. By any standard this was a textbook example of one team, one fight!” concluded Thompson.