The Navy Is Getting 10 New Flight III Destroyers. And It Could Be a Game Changer. 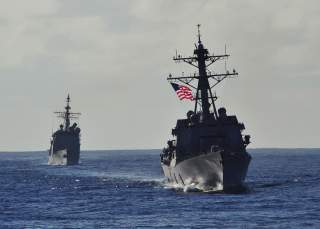 The US Navy has awarded deals for 10 new high-tech DDG 51 Flight III Destroyers and built in options to add even more ships and increase the "build rates" for construction of new warships - all as part of a massive strategic push to accelerate fleet growth and usher in a new era of warfighting technology for the Navy.

Six of the new destroyers will be built by Huntington Ingalls Industries in a $5 billion deal, and four of them were awarded to General Dynamics Bath Iron Works for $3.9 billion, according to a Navy announcement. The acquisition is a multi-year procurement intended to reach from this year through 2022.

"We also have options for an additional five DDG 51s to enable us to continue to accelerate delivery of the outstanding DDG 51 Flight III capabilities to our Naval force," James F. Geurts, assistant secretary of the Navy for research, development and acquisition, said in a written Navy statement.

Construction of the first DDG-51 Arleigh Burke-class Flight III Destroyer is part of a sweeping Navy and Pentagon effort to speed up delivery of new warships and expand the surface fleet to 355 ships on an accelerated timeframe.

In fact, a new software and hardware enabled ship-based radar and fire control system, called Aegis Baseline 10, will drive a new technical ability for the ship to combine air-warfare and ballistic missile defense into a single system.

The farther away ship commanders can see approaching threats, across the spectrum of potential attack weapons, the faster they are able to make time-sensitive decisions about which elements of a ship’s layered defense systems should be used.

​The AN/SPY-6 platform will enable next-generation Flight III DDG 51s to defend much larger areas compared with the AN/SPY-1D radar on existing destroyers. In total, the Navy plans as many as 22 Flight III DDG 51 destroyers, according to a previously completed Navy capabilities development document.

The AN/SPY-6 is being engineered to be easily reparable with replaceable parts, fewer circuit boards and cheaper components than previous radars, according to Raytheon developers; the AMDR is also designed to rely heavily on software innovations, something which reduces the need for different spare parts, Navy program managers have announced.

Earlier this year, the ship’s program manager Capt. Casey Moton said that special technological adaptations are being built into the new, larger radar system so that it can be sufficiently cooled and powered up with enough electricity. The AMDR will be run by 1000-volts of DC power.