The Navy Has 1 Big Weakness: Old Ship-Killer Missiles (But Not For Long) 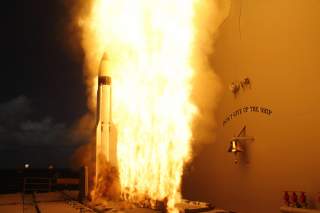 The U.S. Congress is preparing to give a big boost to an advanced version of America’s current anti-ship missiles.

The NDAA provides authorization for the defense budget but funding must still be appropriated by a separate committee. The conference report is the combined bill from the House of Representatives and the Senate. The House and Senate have both passed the bill and it will become law once being signed by President Donald Trump.

The funding increases for the Harpoon Block II+ were first reported by Defense News.

The $26.8 million figure is $12 million more than the U.S. Navy had originally requested. According to Defense News, the money will “go to the Block II+ upgrades, which include GPS and a data link that allows operators to change the missile’s target in flight.”

The U.S. Navy conducted the first operational flight test of the Harpoon Block II+ in January of this year. “We are extremely proud to deliver precision targeting to the warfighter with a flexibility to stay ahead of threats,” Comm. Jon Schiffelbein, NAVAIR’s Harpoon Deputy Program Manager, said following the test.

NAVAIR is the acronym for the Naval Air Systems Command.

As Dave Majumdar previously noted, the Block II+ variant possesses a number of advantages over its predecessors.

“Compared to the original version of the weapon, the Harpoon Block II+ offers greater reliability and survivability,” Majumdar wrote in January, “It includes a new GPS guidance kit, a new data link interface that enables in-flight updates, improved target selectivity, an abort option and enhanced resistance to electronic countermeasures. Moreover, it can be launched from multiple air and surface platforms, according to NAVAIR.”

Even with the upgrades, the Block II+ is merely a stopgap measure, and the United States remains dangerously outgunned--some say "outsticked"--compared to capable adversaries like Russia and China.

The original Harpoons were deployed in the 1970s, and they only have a range of seventy to 150 miles, depending on the variant. By contrast, Moscow and Beijing have both built modern anti-ship missiles with far longer ranges. Russia’s Club-N anti-ship missile, for instance, has a reported range of around 161 nautical miles (185 miles), while Beijing’s YJ-12 has a range of 215 nmi (247 miles).

The U.S. Navy is taking a number of steps to close this gap. Most important among these is the Long-Range Anti-Ship Missile (LRASM). LRASM is a DARPA and U.S. Navy-funded program meant to provide the U.S. Navy and Air Force with an offensive anti-surface weapon (OASuW) to counter the growing threats from anti-access/area-denial (A2/AD) doctrines.

The program was begun under DARPA in 2009 and leverages existing technology from the Joint Air-to-Surface Standoff Missile Extended Range (JASSM-ER) program. Its development was fast tracked under the Pentagon Better Buying Power 3.0 program.

LRASM gives U.S. forces a precision-guided long-range standoff capability that can survive in aggressive electronic-warfare environments. To achieve this, it uses onboard sensors and a semi-autonomous guidance system to reduce its dependence on intelligence, surveillance and reconnaissance (ISR) platforms, network links and GPS navigation.

It also employs “innovative terminal survivability approaches and precision lethality” to avoid advanced enemy countermeasures while still reaching its intended target. Lockheed Martin, which manufactures LRASM, has said it will begin integrating the missiles onto B1-B bombers this year, followed by F/A-18s in 2019. It’s unclear when the missile will begin appearing on surface ships.

But America’s surface vessels should have another new anti-ship missile before they get LRASM. In 2016, the Pentagon began modifying the SM-6 Standard Missile, which is usually used for anti-missile and air-defense missions, to serve as an immediate stopgap capability. In its anti-ship variant, the SM-6 has a range of over two hundred miles but an extremely small warhead relative to the Harpoon. LRASM will ultimately combine the best of both worlds: a missile with a long range and massive warhead, on top of its ability to operate in electronic-warfare environments.

Until then, U.S. Navy ships will have to mix and match the SM-6 and the upgraded Harpoons.