The Navy Has a Plan to Stop Ship-Killer Missiles 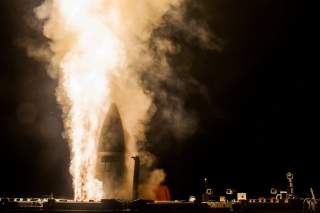 Descending from high altitudes at lethal speeds and often guided by precision sensors, technically improved enemy ballistic missiles can increasingly close in on surface Navy ships, often holding large platforms and even groups of vessels at tremendous risk of destruction.

Many of these threats, to include long-range anti-ship cruise missiles, can travel hundreds of miles to their targets, moving beyond the horizon toward surface ships challenged to detect the approaching weapon with line-of-sight radar systems.

Recognizing the seriousness of these threats, which are quickly increasing in today’s global environment, the Navy is working with industry partners such as Raytheon to integrate an entire family of new radar systems across a wide swath of its surface fleet. The goal is to not only arm surface ships with a new generation of highly-sensitive, discriminating radar technology but succeed in networking them to one another.

This way, targets from beyond the horizon can be detected by one ship’s radar system, which can then share the “track” information with vulnerable ships miles away. Target data can be passed along, or networked, enabling ship commanders to have more time to identify the best response to the attack. Is a rapid counterattack the best option? Perhaps an interceptor missile might be the better option with which to defend a ship?

The new radars, reported to bring an exponential increase in sensitivity and mission effectiveness to sea-based air and missile defense, are in the process of being built into large portions of the fleet to include emerging new DDG Flight III destroyers, amphibious assault ships and even aircraft carriers. They are called the SPY-6 family of radars, the most powerful of which, the SPY-6 (V)1, is now being engineered into the Navy’s first-of-its kind Flight III Destroyer, the USS Jack Lucas (DDG 125).

The Navy’s Above Water Sensors Program Manager, Capt. Jason Hall, explained that the success of the radar systems are inspiring the service to explore new platforms for the technology and pursue a series of weapons and fire control network upgrades moving forward.

“The DDG 125 Jack Lucas sets the technical foundation for the fleet. We plan to leverage this combat system as we look at Frigate, amphibs and carriers,” Hall said Jan. 15 at the Surface Naval Association Annual Symposium, Arlington, Va, referring to SPY-6 radar integration.

The SPY-6 family advances the technical curve in a number of tactically significant respects, in part because it can combine ballistic missile defense and air and missile defense into a single integrated system. This synergy gives the system an ability to track and help destroy enemy drones, aircraft, cruise missiles and long-range incoming ballistic missiles.

“A lot of this is in the back end in the digital processing, so it is a huge change. Digital is a big change from the analog of old days, which gives you a lot of the improved discrimination, sensitivity,” Hall said.

“We are building the arrays for this ship. We have run the gamut as to what this radar can do. We have simultaneous weapons support functions. We have electronic protection and environmental protection,” Hall explained.

It makes strategic sense that the most powerful variant is being engineered into new destroyers, given that the ships are often tasked with protecting carriers and other surface ships while traveling in Carrier Strike Groups. Alongside the (V)1, Raytheon and the Navy are now integrating several additional SPY-6 variants for carriers and amphibs, specifically tailored to their respective mission scopes. The SPY-6 (V) 2, for instance, is a smaller rotating radar and a SPY-6 (V) 3 has three fixed radar faces on the deck houses. These variants will go on both Nimitz class and Ford-class carriers. The (V) 3 has nine radar module assemblies. The (V)3 has three fixed spaces looking out at a different angle, covering 360-degrees with 120-degree panels each. Finally, there is a SPY-6 (V)4 which will be integrated onto existing DDG 51 IIA destroyers during a mid-life upgrade. The (V) 4 has 24 Radar Module Assemblies, compared to the (V) 1, which has 37.

Also of great significance, the Navy and Raytheon are taking new steps to network the systems to one another, using a data link known as LINK 16 and an in-development Raytheon system known as Cooperative Engagement Capability.

Raytheon will further develop sensor, radar and “detect-control-engage” technology through new iterations of this networking technology called Cooperative Engagement Capability. CEC is an integral aspect of emerging ship-defense technologies aimed at “netting” sensors and radar technologies in order to better identify and destroy approaching threats such as anti-ship missiles, drones and enemy aircraft. The real-time, composite network picture provided by CEC is also more resistant to electronic jamming. Mike Mills, Raytheon SPY-6 Program Director, explained to Warrior in an interview, that his firm was exploring innovations designed to expand the radars’ networking and weapons integration in the future, using the current system as a software and hardware framework upon which to build.

“A Navy strike group has a variety of sensors to identify threats, including surface radars, sonar and airborne sensors, along with weapons systems that can engage a threat at various distances. CEC is the integration layer that moves data from the sensors to the appropriate weapon systems, creating what military strategists call an end-to-end, detect-control-engage capability,” a Raytheon statement on CEC explained.

As a sensor “netting” technology, CEC is also quite consistent with the Navy’s current “Distributed Maritime Operations” strategy – an effort to better arm the surface fleet with offensive and defensive weapons technologies. The “distributed” aspect is designed to allow for more expansive dis-aggregated operations so surface ship sensors, radars, radios and communication systems can better network over larger distances. Furthermore, greater distribution of the surface force is designed to prevent groups of ships from being targeted by the enemy; naturally, a more condensed groups of approaching surface ships present an easier target for enemies to hit. Disaggregated, yet networked surface ships, can pursue combat objectives at lower risk of attack.

The SPY-6 family of radars are, by design, being integrated into the Navy’s newest Aegis radar system, called Baseline 10. Working in combined operations with the SPY-6 radar systems, the Aegis hardware and software suite can assist ships with longer-range ballistic missile defense technology using weapons such as an SM-3. For nearer in threats, however, Aegis radar can help integrate with an SM-6 to better protect surface ships from attack.

NIFC-CA technology, which has used both an F-35 and E2-D Hawkeye as an airborne sensor to track and relay threat information, connects to a ship-based fire-control system able to launch an SM-6 to intercept store threats at further distances the ship defenses were previously able to do.

With an active seeker, an SM-6 is able to send an electromagnetic signal or “ping” forward from the missile itself; by not needing a ship-based illuminator, the missile can use its own integrated “active” seeker technology to better pursue moving or fast-changing targets while in flight. Analyzing electromagnetic energy traveling at the speed of light, ship-based radar, fire-control and computer systems assess the return signal to determine the shape, size, speed and distance of an approaching threat.

An engineering model of the SPY-6 radar is now being tested at the Pacific Missile Range Facility, Hawaii, where, according to Hall, the system is showing promise.

The Navy now has 21 DDG 51 destroyers on contract, Miller said.