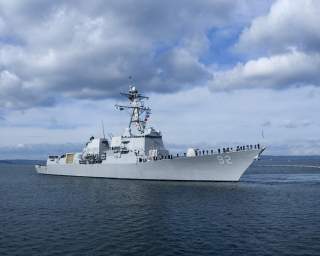 Mills explained that all variants of the SPY-6 are architected on a common software baseline, thus enabling the possibility for further integration on additional Navy platforms. In fact, different variants of the radar have been scaled for a range of different mission sets on various platforms. Alongside the integration of AN/SPY- (V)1 for Flight III Destroyers, Raytheon and the Navy are now integrating several additional variants for carriers and amphibs, specifically tailored to their respective mission scopes. The SPY-6 (V) 2, for instance, is a smaller rotating radar and a SPY-6 (V) 3 has three fixed radar faces on the deck houses. These variants will go on both Nimitz class and Ford-class carriers. The (V) 3 has nine radar module assemblies. The v3 has three fixed spaces looking out at a different angle, covering 360-degrees with 120-degree panels each. Finally, there is a SPY-6 (V)4 which will be integrated onto existing DDG 51 IIA destroyers during a mid-life upgrade. The (V) 4 has 24 Radar Module Assemblies, compared to the v1, which has 37.

All of these SPY-6 radars, which bring a sensitivity expanded beyond legacy or existing radars, have their power, cooling and scope adjusted to fit the specific missions of various platforms. Destroyers, for instance, will need to conduct Ballistic Missile Defense to protect carriers in Carrier Strike Groups. Amphibs and Carriers, which are receiving a different SPY 6 variant, have different mission needs.