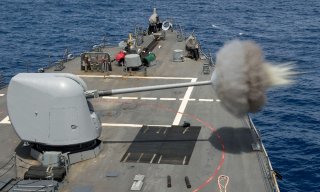 The U.S. Navy has fired an emerging hypersonic “prototype” round as far as 109 nautical miles in only two minutes, marking a potential breakthrough in the realm of high-speed attack at five times the speed of sound.

Weapons developers describe the projectile as a “hypersonic body shape,” and say that the prototype was fired at White Sands Missile Range from an electromagnetic gun.

“We were able to gather data, prove the ability to gather data in hypersonic regimes and take that data and share it with academia and our partners. We were able to prove our models, test out our components, technologies and subsystems,” Adam Jones, Advanced Hypersonic & Guided Weapons Division Head, Naval Surface Warfare Center, Dahlgren, told an audience at the 2022 Sea Air Space Symposium.

This prototype test is likely to advance several of the Navy’s key areas of inquiry, Jones said, including what are called boundary layer transition and thermal heating. Each of these are crucial areas of hypersonic flight that are necessary to ensure flight path trajectory, speed, targeting, and in-flight thermal stability.  Temperature is, among other things, crucial to hypersonic flight as projectiles traveling at Mach 5 speeds can easily overheat and explode or veer off course. To counter this risk, engineers regularly build hypersonic projectiles with special advanced, heat-resistant materials to ensure a smooth, uninterrupted flight path. These dynamics also pertain to the “boundary layer,” a term referring to the airflow surrounding a hypersonic projectile. Weapons developers work to ensure that the airflow or “boundary layer” surrounding the weapon in flight is “laminar” or smooth, as opposed to “turbulent.” A turbulent airflow can cause molecules to move around between layers surrounding the projectile, possibly causing the round to overheat or veer off course.

“We are learning how to fly at Mach 5. We also looked at the functional areas across Hypersonics Applied Materials, high temperature and advanced structural materials guidance, navigation control, and hypersonic body shape,” Jones said.

How soon might this projectile and gun be operational on board a warship? What might that mean to tactical commanders? White Sands Missile Range, New Mexico, has a “desert ship” test environment to assess Naval weapons systems, yet further kinds of integration and testing may be needed before the weapon can fully integrate into a ship’s weapon system. However, firing hypersonic weapons from the deck of a destroyer or cruiser may not be that far off, and it is something which promises to reshape the future of maritime attack. For instance, should a forward-operating drone be able to locate an approaching fleet of small attack boats approaching the horizon, identify land launchers for anti-ship guided missiles, or even detect enemy warships from great standoff ranges, ship commanders could fire off a hypersonic missile to destroy the target in minutes if not seconds.

The principal advantage of hypersonics is ”time”; the speed at which they can hit an enemy target significantly shortens an adversary’s potential response time. Ship or shore defenses, for example, would be quite challenged to detect and respond to an approaching hypersonic projectile fast enough, leaving them quite vulnerable.