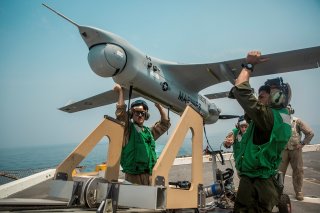 The U.S. Navy is surging into the future with a growing fleet of air, surface, and undersea drones to support its Distributed Maritime Operations strategy and pursue technological superiority over potential adversaries.

However, there will not be ocean robots using lethal force autonomously anytime soon. The Navy is pursuing what it calls a “hybrid” fleet.

Naval mines can increasingly find and destroy targets autonomously. Surveillance and targeting can also be done without human intervention, but the Navy is committed to keeping humans in charge of decisions regarding the use of lethal force. Small Unmanned Surface Vessels can be armed and operate in coordination with drone boats conducting surveillance, identifying targets, and transmitting data. Department of Defense policy does not allow for robots to use lethal force without human decision-makers, though.

There may be some application for autonomous technologies with defensive weapons, however. An autonomous system could be used for missile defense, for example. The ability of artificial intelligence to gather, organize, analyze, and respond to threats may make it advantageous to allow some autonomy. Radar might intercept an approaching anti-ship missile, offering details for AI-enabled computer processing to make an immediate determination as to the exact nature of an approaching threat, determine the optimal countermeasure, and cue ship-board fire control systems. All of this could occur in milliseconds, much faster than a human could respond.

However, even in these non-lethal scenarios, human authority overseeing operations in a command and control role is a key priority. A combination of human cognition and advanced technologies enabled by artificial intelligence is seen as the way forward.

Drone technology supports the Navy’s Project Overmatch concept which seeks to link sensors and shooters across multiple domains. It also supports the service’s need to be expansive, dispersed, and distributed. All of these tactical advantages offer value when managed by humans in a decision-making role in a role computers cannot replicate. Computer systems are poorly suited to understanding subjective variables, intentions, and lack the ability to perceive like humans can.

Small cited the Chief of Naval Operations’ (CNO) strategic thinking, explaining the value of unmanned systems in the context of a hybrid fleet that integrates the best attributes of each to create overmatch in maritime warfare. The CNO created a task force on unmanned systems at the Pentagon and published a document called the Unmanned Campaign Framework.

“That (Unmanned Campaign Framework) was a good overview of all of the unmanned system development efforts across the Navy and across all domains, but it also highlighted the need to develop holistic unmanned capabilities. It's not just about the platforms themselves, but it's about the ability of the platforms to share data and employ effects to real military capabilities,” Small said.