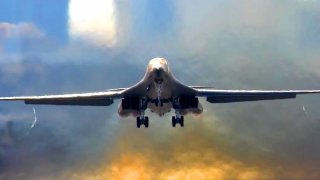 It’s no secret that the U.S. Navy wants to arm its P-8 patrol planes with new anti-ship missiles plus precision-guided bombs, mines and aerial decoys.

At the same time, it’s obvious that the U.S. Air Force is eager to find new roles for its aging, and potentially dwindling, force of B-1 bombers.

Now one Navy officer sees an opportunity for the two services to work together. Writing in Proceedings, the professional journal of the U.S. Naval Institute, Lt. Cmdr. John Leeds proposed that the Navy and Air Force combine the P-8s and B-1s into new “patrol bombing squadrons,” or VPBs, that would train to sink the Chinese fleet.

“Pairing the B-1 with the P-8 in maritime strike sensor-shooter teams would be a more effective solution for sea control than employing either platform alone,” Leeds wrote. “The P-8 has the sensors, data-links, range and experienced aircrews to perform maritime search and targeting, and the B-1 has the ability to carry large numbers of the [LRASM] long-range anti-ship missile.”

The Air Force operates 62 B-1s at bases in Texas and South Dakota. After decades of hard use, the B-1s are in poor material condition and badly in need of upgrades. Modification programs and extensive depot maintenance have tied up many of the swing-wing bombers. Others are idle while awaiting spare parts.

Just seven of the 62 B-1 bombers were fully mission-capable in July 2019, South Dakota senator Mike Rounds revealed. The low readiness rate -- one of the lowest across the Air Force’s fleet -- weighed on the service’s plans for its bomber force.

While B-1 readiness improved in 2020, the Air Force still is asking Congress to allow the service to begin retiring -- years earlier than planned -- 17 of the least-reliable B-1s. The flying branch has considered arming at least 18 of the remaining 45 B-1s with a new, Mach-five hypersonic missile.

But the B-1 also carries the LRASM, a new 300-mile-range anti-ship missile. “Although both the P-8 and B-1 could do [surface-warfare] alone, lethality is maximized when their sensors, experience, and weapons are combined,” Leeds wrote. “A VPB force could strike enemy surface ships from outside the range of ship-based surface-to-air missiles.”

Leeds’s idea is for P-8s to spot ships and B-1s to lob missiles at them, although both types possess weapons and sensors and could swap roles. The question is how the Navy and Air Force would combine the planes.

Leeds proposed a “virtual VPB.” “The Air Force would keep B-1s in service and allocate flight hours to training in the maritime environment with P-8s. In return, the Navy would purchase a percentage of LRASMs for the B-1.”

“The Navy and Air Force would work jointly to improve survivability and countermeasures for both aircraft, including improved towed decoys and sensors,” Leeds added. “The B-1 would benefit from an infusion of Navy money toward improved survivability, while the P-8 could be fitted with something like an Air Force–provided AN/ALE-50 towed decoy system. The B-1 and P-8 weapon schools would coordinate closely. A permanent B-1/P-8 weapons and tactics instructor billet exchange could be established between the respective schools.”