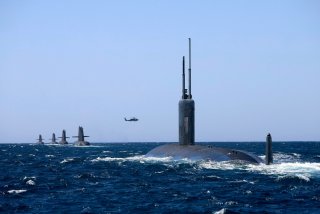 With U.S. nuclear submarines likely to face diesel-electric subs in any serious conflict, it would seem essential to compare the vessels’ warfighting abilities. Comparing the technical merits of the submarines (hardware) is useful, but the relative competency of the crews (software) cannot be ignored.

But all this training on nuclear operations and safety detracts from the time available for navigation and warfare training. Operating in the undersea environment is as much an art as a science. Understanding ocean salinity, temperature, bottom contours, sound propagation, sonar operations, weapons settings, combat information systems, etc. requires an extremely difficult set of skills and is a full-time job in itself. Any deficiencies in operating in this environment can have severe consequences during peacetime operations, and far worse in wartime.

How does anyone maintain competence in both nuclear engineering and submarine warfare tactics and navigation? Is “maintaining competence” an acceptable standard during an actual wartime scenario? I would submit that the U.S. Navy has obtained excellence in nuclear operations and safety, but sacrificed its skills in undersea warfare and navigation.

This is an extremely frustrating dilemma for all U.S. submarine officers and contributes greatly to the retention problems of the submarine force. As the U.S. attempts to grow its submarine fleet, it needs to reduce the number of trained personnel leaving the force.

Any professional wants to 1) be adequately compensated for their skills and 2) good at their job. The Navy is continually addressing the first issue with annual bonuses but ignoring the latter. It is a rare submarine officer who will tell you they are an excellent nuclear engineer and an excellent warfighter. Given the choice, most would prefer to specialize in one or the other. There are also many outstanding prospective submarine warfare officers that are never given the opportunity because they are not capable of solving a differential equation (required by most engineering disciplines).

Unencumbered by nuclear propulsion, the crew of a diesel submarine could easily have twice the amount of training in navigation and undersea warfare tactics. In joint exercises, nuke crews have not fared well against their diesel-electric counterparts.

This is a significant problem that could easily be addressed. The U.S. submarine force is one of the few naval warfighting organizations that operates in this fashion. The UK and French nuclear submarine forces have separate engineering and warfare specialties, as do most other U.S. combat ships, including nuclear-powered aircraft carriers. The engineers take care of the ship’s propulsion and other systems; the warfare officers fight the vessel.

The enlisted crew of U.S. submarines is separated between engineering and warfare specialties (with extensive cross-training, primarily for casualty control purposes). There is, however, a related problem. An exceptional second-class petty officer (E-5, non-commissioned officer) in an engineering specialty can qualify as the Engineering Watch Supervisor (EWS), the most senior watch for enlisted personnel. This is usually after four-to-six years of service—early in a career. At eight years of service, they may apply for the Limited Duty Officer (LDO) program; but if selected, they must leave submarines. Nuclear LDO personnel are not assigned to submarines. So, if these highly trained and motivated individuals want to remain in the submarine force, they have no further opportunities in the engineering area. This contributes to a retention problem with nuclear-enlisted personnel.

U.S. submarine force warfighting capability could be BETTER. With a lot more job satisfaction for the crew.

Both of the above problems contribute to a loss of extremely valuable personnel and a significant degradation in the warfighting capabilities of the U.S. submarine force. And both could be eliminated by separating the submarine officer engineering and warfare specialties and allowing submarine-qualified LDOs to serve as submarine engineering officers, up to and including chief engineer.

Implementation of these recommendations would also be relatively easy. Nuclear LDOs already serve as division officers in nuclear-powered carriers. There is already a program in place to train prospective executive and commanding officers (of aircraft carriers) in nuclear propulsion system operations and safety. Prospective submarine commanders (warfare officers, not nuclear trained) could attend the same program before being assigned to a nuclear submarine. I would assume this is part of the plan for the AUKUS submarine program being developed for Australia. Transitioning to separate engineering and warfare specialties would make the U.S. submarine force consistent with the UK and Australian forces (and the rest of the U.S. fleet).

Most importantly, these recommendations would result in far better-trained personnel in both the engineering and warfare departments. U.S. submarine crews must be better warfighters to survive an encounter with diesel-electric subs in a real conflict.