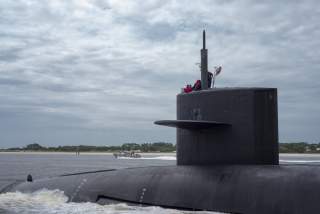 The Pentagon’s research entity and BAE Systems are working together to develop a next-generation undersea drone communications technology to help identify mines, find enemy submarines and surveil many items relevant to combat missions.

The Positioning System for Deep Ocean Navigation (POSYDON) is able to quickly relay location coordinates from undersea drones on patrol to command and control systems on board a ship or submarine.

The program, underway now for several years, is a collaborative enterprise between industry and the Defense Advanced Research Projects Agency (DARPA).

POSYDON provides “omnipresent, robust positioning across ocean basins. By ranging to a small number of long-range acoustic sources, an undersea platform would be able to obtain continuous, accurate positioning without surfacing for a GPS fix,” DARPA developers explained.

While experts say there are some very low-frequency radios that can transmit some kind of signal undersea, submarines need to surface in order to achieve a strong radio frequency (RF) or GPS signal for on-the-spot data and communications.

“You can receive GPS at very shallow depths, but that is not relevant to where we operate. POSYDON brings a ‘GPS-like’ capability to submerged users,” said Lin Haas, program manager for the DARPA Strategic Technology Office, in a DARPA podcast released last year.

Military scientists and technology developers refer to the effort to establish connectivity in a “GPS-denied” environment as acquiring “precision, navigation and timing.”

However, the scientific challenges of bringing seamless connectivity undersea, similar to the way GPS functions on the surface, are substantial, Haas explained.

GPS signals work with algorithms able to compute the distance of an object by knowing the constant or “fixed” speed of light and the time of travel. If the length of travel is identified, along with the speed of a signal, then algorithms can quickly determine a precise distance, therefore identifying an object.

For example, an electromagnetic signal used by a radar system — or laser from a weapon’s laser rangefinder — would use the known speed of light, and time of travel, to quickly identify the location, shape or speed of an object.

However, with acoustic signals undersea, determining distance is much more complex, Haas explained.

As a result, there is no linear transmission from transmitter to receiver with acoustic signals.

“Acoustic signals will take many paths; the signal is refracted through temperature and pressure profiles. Algorithms can improve current models and develop new modes,” Haas added.

Therefore, underwater drones can use acoustic waves to relay real-time info back to submarines.

“GPS signals bounce off ocean surfaces and cannot penetrate seawater. The importance of POSYDON is to make sure that these UUVs [unmanned underwater vehicles] can really focus on their missions without having to periodically come to the surface for GPS to figure out exactly where they are,” Geoff Edelson, director of Maritime Systems and Technology at BAE Systems, told Warrior in an interview last year. "

Phase I of the program focuses on accurately modeling the signal propagation channel, and Phase II focuses on developing the signal waveform. A complete positioning system is scheduled to be demonstrated in Phase III.

The technology relies upon a kind of “triangulation,” Edelson explained. A GPS signal emerging from a satellite is sent to a surface node — which then uses acoustic waves to connect with and locate an undersea drone.

The POSYDON effort is progressing through Phase I of a three-phased effort; Phase I involves modeling signal propagation channels, Phase II is intended to develop a single waveform and Phase III is aimed at building a complete prototype positioning system, according to DARPA.

“Right now we are analyzing data to ensure the concept has merit. We are going ‘point to point’ from a source to one or two receivers,” Edelson said.

UUVs that are better able to transmit information back to host platforms, and quickly provide their location data, can naturally assist in locating enemy targets, undersea mines and other items of critical relevance to Navy missions.

POSYDON technology, once operational, could work with existing platforms, such as Wave Gliders, designed to collect target and threat information, as well as oceanographic and hydrographic information.

For instance, a current underwater drone called the Seaglider uses buoyancy and wings to achieve forward motion as opposed to an electrically driven propeller. For long periods of time it is able to gather oceanographic data, such as water column temperature or salinity, collecting the data and then sending it back.

Emerging POSYDON technology could also be of great use to Virginia-class attack submarines and Columbia-class ballistic missile submarines working to establish navigational parameters, identify objects of interest and even pinpoint threat locations at greater distances.

In fact, the Navy is now experimenting with undersea drones that are able to launch and return from submarine missile tubes, improving mission efficiency and expediting launch and recovery operations. Therefore, being able to precisely identify the location of operational UUVs in a given area of operations would be of great value.

This trajectory will ultimately likely lead to the use of more AI, drawing upon more independent, computer-driven unmanned systems to gather, organize and integrate a vast array of different information and sensor data before providing it to human commanders.

Groups of undersea drones will soon simultaneously use sonar and different sensors to identify and destroy enemy submarines and surface ships, search for mines, collect oceanographic data and conduct reconnaissance missions — all while a single human performs command and control functions aboard a Navy ship or submarine, senior Navy officials explained.

A DARPA statement, attributed to program manager John Waterston, reinforces this by emphasizing how "ranging to a small number of long-range acoustic sources, an undersea platform would be able to obtain continuous, accurate positioning without surfacing for a GPS fi." an integrated network, and more quickly perform a wider range of functions without needing every individual task controlled by humans. The strategy is also aimed at enabling submarines, surface ships and some land-based operations to take advantage of these fast-emerging computer technologies.

Perhaps a number of small drones could send out an acoustic ping and then analyze the return signal to pinpoint the location of a threatening enemy target, providing a submarine with the necessary data to launch a precision-guided heavyweight torpedo to destroy the threat from a safer distance.

Integrated drone groups would then instantly relay pertinent data to underwater or ship-board computing systems and sensors. As a result, humans in a command and control function would have access to relevant information faster and more efficiently, providing a larger window with which to make critical decisions, senior Navy officials explained.