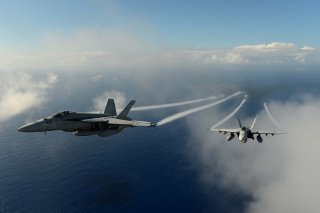 The test occurred at the Point Mugu Sea Range, just off the southern California coast. The missile struck a target on San Nicolas Island, about sixty-five miles south of Point Mugu.

“This second flight test verified AARGM-ER’s ability to detect, identify, locate and engage a land-based air defense radar system from an extended range,” said U.S. Navy Capt. A.C. Dutko, Program Manager for Direct and Time Sensitive Strike, in a Northrop Grumman press release. “Through the exceptional efforts of our government/industry team, we are another step closer to delivering capability to suppress the most advanced adversary air-defense systems without putting our warfighters in danger.”

The AARGM-ER is essentially an upgraded, more capable variant of the AARGM anti-radiation missile used to suppress or destroy enemy air defenses.

“AARGM-ER provides the U.S. Navy with the capability to stay ahead of evolving threats,” said Northrop Grumman corporate vice president Mary Petryszyn, in the release. “This flight test further demonstrated the critical capability of AARGM-ER to precisely engage long-range threats, while enabling launching aircrew to remain at a safe distance.”

Anti-radiation missiles are able to detect radio frequencies and home in on the sources of radio emissions. These kinds of missiles are often used in an air-to-ground capacity to destroy communications nodes and anti-aircraft defenses before other aircraft move in, or prior to missile salvoes.

Compared to the standard AARGM, this variant offers an extended range that is more survivable and effective. Though difficult to verify independently, the AARGM-ER missile’s capabilities are likely an improvement over the predecessor. Its range likely doubles to about three hundred kilometers, with speeds increased to Mach 4.

The Navy is testing the AARGM-ER missile for compatibility with F/A-18E/F Super Hornets and EA-18G Growlers, as well as F-35 Lightning II variants.

Although the AARGM-ER remains in testing, the missile promises to offer the Navy a potent anti-radiation capability with extended range. Moreover, with future integration onto the three F-35 platforms expected, other service branches and allies abroad that fly the stealth fighter will be able to tap into the missile’s capabilities.