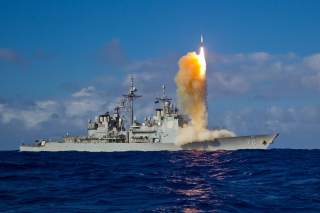 The Pentagon plans a “first-of-its-kind” test of an unprecedented weapons capability to intercept and destroy an enemy Intercontinental Ballistic Missile "ICBM" -- from a Navy ship at sea using a Standard Missile-3 Block IIA.

The concept, as articulated by Pentagon officials and cited briefly in this years’ DoD “Missile Defense Review,” would be to use an advanced SM-3 IIA to “underlay” and assist existing Ground-Based Interceptors (GBI), adding new dimensions to the current US missile defense posture.

“We are going to test this,” a senior Pentagon weapons developer told Warrior Maven.

The testing, Pentagon officials tell Warrior, is slated for as soon as next year. The effectiveness and promise of the Raytheon-built SM-3 IIA shown in recent testing have inspired Pentagon weapons developers to envision an even broader role for the weapon. The missile is now “proven out,” US weapons developers say.

“The interceptor (SM-3 IIA) has the potential to offer an additional defensive capability to ease the burden on the GBI system and provide continuous protection for the US homeland,” the Pentagon Missile Defense Review states.

The report specifies that Congress has directed DoD to examine the feasibility of the SM-3 IIA against an ICBM-class target.

“The SM-3 IIA was not designed to take out ICBMs, but is showing great promise. This would be in the upper range of its capability -- so we are going to try,” the Pentagon official told Warrior.

A mobile, sea-based ICBM defense could massively expand the protective envelope for identifying and intercepting enemy attacks. As opposed to fixed, land-based GBIs, Navy ships could maneuver into key positions based on warnings or intelligence information. Should they operate closer to the shore, Navy ships armed with SM-3 IIAs could bring the possibility of taking out an ICBM early in its flight, perhaps just after it enters space.

“Due to the mobility of sea-based assets, this new (SM-3 IIA) underlay capability will be surged in a crisis or conflict to further thicken defensive capabilities for the US homeland,” the DoD Missile Defense Review adds.

The SM-3 IIA, which has recently achieved several new test milestones and already demonstrated an ability to intercept short and medium-range ballistic missiles, is the latest, most high-tech SM-3 variant; compared to previous SM-3 variants, the SM-3 IIA is larger, more precise and longer range. SM-3 missiles, launched from both Navy ship Vertical Launch Tubes and land-based Aegis Ashore systems, have had an ability to travel beyond the roughly 60-mile limit of the earth’s atmosphere. However, until now, SM-3 IIAs have not generally been thought of as a weapon able to intercept or destroy larger, faster, space-traveling ICBMs.

“The SM-3 IIA would not be able to hit an ICBM at a high altitude, but it can go outside the earth’s atmosphere,” the Pentagon official said. “You want to hit it as far away as possible because a nuke could go off.”

While both Boost and Terminal phase missile defenses are also being developed, hitting an ICBM during its Mid-Course phase offers increased opportunities for intercept. The Mid-Course phase is the longest, as it can last 20 mins in some cases during an intercontinental flight. This allows defenders to take more than one shot at knocking out the ICBMs. This concept, or challenge one might say, informs the basis the Pentagon’s developing Multiple Kill Vehicle -- an interceptor able to carry multiple kill-vehicles on one missile using sensors to discern actual missiles from decoys.

As Pentagon developers describe it, an SM-3 Block IIA missile is a larger version of the SM-3 IB in terms of boosters and the kinetic warhead, allowing for longer flight times and engagements of threats higher in the exo-atmosphere.

As Pentagon developers describe it, an SM-3 Block IIA missile is a larger version of the SM-3 IB in terms of boosters and the kinetic warhead, allowing for longer flight times and engagements of threats higher in the exo-atmosphere.

Aegis radar works by sending electromagnetic “pings” into space to identify the location and trajectory of an approaching missile threat – and then works with an integrated fire control system to guide the SM-3 interceptor to its target, with the intent of destroying it or knocking it out of the sky. At sea, integrated technologies and electronics on the ship, including fire control systems, link information from the Aegis radar with a ship’s vertical launch tubes able to fire out SM-3 interceptor missiles.

In existence since 2004, Aegis BMD is now operating on more than 28 Navy ships and with a number of allied nations. U.S. allies with Aegis capability include the Japan Self Defense Forces, Spanish Navy, the South Korean Navy, the Royal Australian Navy, Italy, Denmark and others, MDA officials said.

The Pentagon’s recently released 2020 budget calls for the addition of seven SM-3 Block IIA missiles, for a total of 54 missiles procured through 2020.