The Navy Wants Swarm Weapons That Can Do Something Amazing 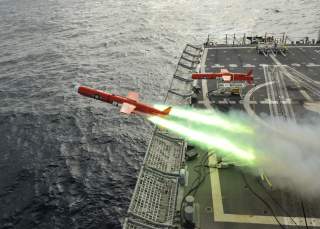 The U.S. Navy wants to develop drones that are powered by harvesting “battlefield energy.”

Which is a more charitable way of describing a drone that flies by stealing electricity from power lines.

The problem is that future conflicts are likely to feature clouds of small drones, whether operating in swarms to overwhelm an enemy, or a mini-drone carried in a soldier’s pocket that flies ahead to scout out a building. But tiny drones have tiny batteries measured in thirty minutes or so of flight, and the battlefield is not the place to search for an electrical outlet to recharge.

“The infrastructure to manage a future fleet of sUAS [small UAVs] in the field under austere conditions may be daunting considering the magnitude of battery recharging needs,” the navy notes. “It is also desirable to simultaneously increase mission duration and persistence; therefore, the ability to scavenge power directly from the battlefield would be an important military technology with other dual-use civilian applications.”

But what if the fighting is in a city, where there will likely be plenty of electrical poles and power lines?

This would allow a drone “to ‘dock’ on a power line in an urban environment, scavenging magnetic energy as a means to trickle-charge its onboard batteries prior to mission continuation, could provide significant tactical benefits,” according to the navy research solicitation, which is looking for answers from industry and academia. “If the energy scavenging source is collocated at the mission area, full mission persistence might be achieved and the micro- and small UAS may never need to return to base.”

Remarkable is the amount of energy that’s floating around a battlefield. “The types of energy harvesting that fall into this category are broad, and include vibrational energy, simple mechanical energy, and electromagnetic energy,” says the navy. “Sources of electromagnetic energy that is abundant and available for harvesting and conversion include high-voltage substations, transformers, and alternating current transmission line (i.e., power lines).”

High-voltage substations on the power grid generate AC electric field strengths that are “comparable to solar panels operating on a cloudy day.” As if that wasn’t tempting enough for drone designers fretting over how maximize the juice that keeps their progeny flying, the navy also suggests that wireless sensors could be placed around these power nodes to also siphon off energy to keep their batteries topped off.

All of which conjures images of flocks of drones hanging from electrical lines like pigeons. It sounds comical, but it actually revives an age-old concept. Napoleon’s armies were legendary for their ability to “live off the land,” foregoing the need for cumbersome supply by looting food and supplies from the regions they passed through.

A drone that can recharge its batteries from an enemy’s energy sources will have enough juice to conduct operations for as long as it is mechanically able. All at the enemy’s expense.