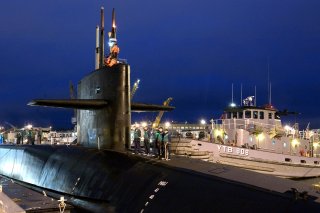 The Navy has now completed at least one-fourth of the design drawings and begun advanced work on a stealthy "electric drive" propulsion system for the emerging nuclear-armed Columbia-Class ballistic missile submarines -- as part of its strategy to engineer the quietest, most technically advanced and least detectable submarine of all time.

“Of the required design disclosures (drawings), 26-percent have been issued, and the program is on a path to have 83-percent issued by construction start,” Bill Couch, spokesman for Naval Sea Systems Command, told Warrior Maven several months ago.

Navy developers explained that electric-drive propulsion technology still relies on a nuclear reactor to generate heat and create steam to power turbines. However, the electricity produced is transferred to an electric motor rather than so-called reduction gears to spin the boat's propellers.

The nuclear-armed submarines are expected to serve all the way into and beyond the 2080s.