The Navy's Epic Railgun Is About to Undergo a "Shakedown" 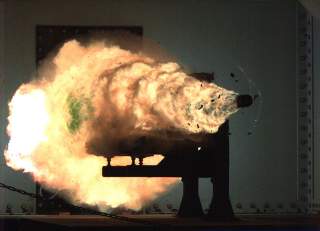 The only test publicly announced by the Navy took place on May 15, when WSMR engineers and technicians fired off four rounds "with full diagnostics and verification," according to the Navy statement.

The Navy's electromagnetic railgun is undergoing what officials described as "essentially a shakedown" of critical systems before finally installing a tactical demonstrator aboard a surface warship, the latest sign that the once-beleaguered supergun may actually end up seeing combat.

That pretty much means this is could be the last set of tests before actually slapping this bad boy onto a warship, for once.

"The installation of the railgun began earlier this year and required a large effort for the mount, gun, power controls, displays and functional ties into the range," site manager John Winstead said in a statement. "The object of the test was essentially a shakedown of the newly-installed mount with accompanying power containers, controls and a fully functional execution team."

The only test publicly announced by the Navy took place on May 15, when WSMR engineers and technicians fired off four rounds "with full diagnostics and verification," according to the Navy statement: "The tests were very successful and alleviated the need to have further installation and check-out testing required for verification."

The Navy's quiet announcement of the "shakedown" tests came amid news that the Office of Naval Research was inching towards actually mounting the railgun on a warship, suggesting that Navy engineers have finally managed to solve the issues of both a universal mounting system for surface vessels and the "pulsed-power architecture" required for multi-shot salvos.

In May, the Navy revealed in the latest edition of its Northwest Training and Testing draft Supplemental Environmental Impact Assessment (NWTT EIS/OEIS) that "the kinetic energy weapon (commonly referred to as the rail gun) will be tested aboard surface vessels, firing explosive and non-explosive projectiles at air- or sea-based targets" in the Pacific Northwest in the coming months.

The Navy's explicit emphasis on the mount and power systems in particular are a good sign for the electromagnetic railgun. As Task & Purpose previously reported back in December 2017, railgun proponents feared that changing budget priorities would hamper the development of a tactical shipboard demonstrator, consigning the railgun to R&D limbo while the Pentagon appeared increasingly focused on the hypervelocity projectiles (HVP) that are just as effective when fired from conventional artillery.

As recently as February 2019, Chief of Naval Operations Adm. John Richardson had declared the railgun "[a] case study that would say, 'This is how innovation maybe shouldn't happen.'"

"We've learned a lot [from the project] and the engineering of building something like that that can handle that much electromagnetic energy and not just explode is challenging," Richardson said at the time. "We're going to continue after this — we're going to install this thing, we're going to continue to develop it, test it ... It's too great a weapon system, so it's going somewhere, hopefully."

It seems that Railgun enthusiasts can put those earlier concerns about changing budget priorities to rest. As The War Zone points out, the Navy's fiscal 2020 budget request included an additional $7.6 million over last year's budget request to keep plugging away at the system. And with plans for a tactical demonstrator apparently taking shape, the supergun appears primed to blow skeptics out of the water.