The Navy's Most Deadly Submarine Ever Has a Serious Problem 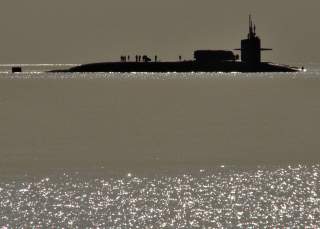 The US Navy is charting a new course for its emerging nuclear armed Columbia-Class ballistic missile submarines while it examines potential fixes to recently discovered welding problems with early construction of some of the boat’s missile tubes.

The service is now conducting a range of engineering assessments and analyses to both determine the scope of the problem and explore potential remedies, officials said.

Of greatest significance, perhaps, is that Navy officials tell Warrior Maven they do not expect any delay or major problems with the long-term development of the new submarines.

Developers say the reason for this is simple - Navy planners built-in procedural time and flexibility to allow for adjustments and needed fixes as part of the process along the way.

“The Navy purposely planned for early construction of the Common Missile Compartment including missile tubes and first article quad pack, to mitigate risks such as these, and construction start for Columbia remains on schedule in 2021,” William Couch, spokesman for Naval Sea Systems Command, told Warrior Maven.

Accordingly, formal production is still scheduled for 2021 as a key step toward fielding a new generation of nuclear-armed submarines to serve all the way into and beyond the 2080s.

For many years now, early construction, prototyping and research and development work on the submarine’s technologies have been underway - particularly with the missile tubes. Developers with submarine-maker General Dynamics Electric Boat have been working on “tube and hull forging,” a process where missile tubes are welded into quadrants or “four packs” before being inserted into larger submarine modules being built for the boats.

The missile tube complication, which has been largely determined to involve only one of several subcontracting vendors building the tubes, is now being resolved. Some of the impacted tubes are now being evaluated.

The subcontractor involved, called BWXT, has already delivered some of the missile tubes to the builder’s yard.

“All BWXT welding requiring volumetric inspection has been halted until the investigation is complete,” Couch said.

The Navy has not formally accepted delivery of the missile tubes, as they will ultimately be accepted prior to shipment to the UK or at USS Columbia delivery, service officials said.

Navy is working with the UK on a common missile compartment to be used for both the new US Columbia Class and the UK’s emerging Dreadnought ballistic missile submarines.

The Navy is working closely with the UK to evaluate impacts to Dreadnought, Couch added.

“Impacts to the delivery of missile tubes to the UK will be assessed upon completion of GDEB's (General Dynamics Electric Boat) efforts to define and scope next steps,” Couch said in a statement.