The Navy's Most Powerful Aircraft Carrier Ever is 50% Complete 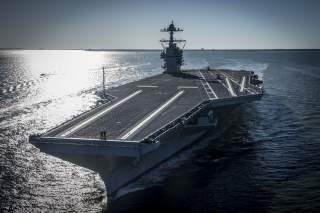 Builders report the massive progress is due, in large measure, to the integration of one of the largest planned steel structures, the "superlifts," HII reports.

"Weighing approximately 905 metric tons, the unit is one of the heaviest of the planned steel structures, known as superlifts, that will be joined together to make up the second ship in the Gerald R. Ford class. The superlift of the aft section of the ship between the hangar bay and flight deck is 80 feet long, about 110 feet wide and four decks in height," a statement from Huntington Ingalls said.

Earlier this year, the Navy completed the addition of the lower stern, Huntington Ingalls Industries announced.

HII ship developers have been employing a newer construction strategy for the Kennedy, involving a handful of techniques intended to lower costs and call upon lessons learned from the building of the first Ford-class carrier in recent years, the USS Gerald R. Ford (CVN 78).

With so much of the ship built, hundreds of structural units have been completed on items such as pipe assemblies, cabling, shafts, rudders and struts for the ship, HII reported in an Aug. 31 statement.

Ford Class Serves into the Next Century

The USS Kennedy will replace the USS Nimitz which is due to retire by 2027; the Ford-class carriers are slated to replace the existing Nimitz-class carriers on a one-to-one basis in an incremental fashion over the next fifty years or so.

This technique, referred to by Huntington Ingalls developers as “modular construction,” was also used when building the Ford; the process welds smaller sections of the ship together into larger structural “superlift” units before being lifted into the dry dock, HII statements explained.

Construction begins with the bottom of the ship and works up with inner-bottoms and side shells before moving to box units, he explained. The bottom third of the ship gets built first. Also, some of the design methods now used for the Kennedy include efforts to fabricate or forge some parts of the ship - instead of casting them because it makes the process less expensive, builders explained.

HII ship developers have been making an aggressive effort to lower costs of the USS Kennedy. Officials have said that the cost of the USS Kennedy will be well over $1.5 billion less than the costs to build the first Ford-Class ship.

The Navy received substantial criticism in recent years from lawmakers and government watchdog groups during the construction of the USS Ford for rising costs. Construction costs for the USS Ford wound up being several billion above early cost estimates. Cost overruns with the construction wound up leading Congress to impose a $12.9 billion cost-cap on the ship.

At the time, Navy officials pointed out that integrating new technologies brings challenges and that at least $3 billion of the Ford’s costs were due to what’s described as non-recurring engineering costs for a first-in-class ship such as this. Nonetheless, service leaders have consistently said that the Navy is making substantial progress with efforts to lower costs for the Kennedy.

Also, Newport News Shipbuilding – a division of HII - was able to buy larger quantities of parts earlier in the construction process with the Kennedy because, unlike the circumstance during the building of the USS Ford, the Kennedy’s ship design was complete before construction begins.

As for the design, the Kennedy will be largely similar to the design of the USS Ford, with a few minor alterations. The Kennedy will receive a new radar and its aircraft elevators will use electric motors instead of a hydraulic system to lower costs.

The new radar, called the Enterprise Air Surveillance Radar, or EASR, is slated to go on the now-under-construction USS Kennedy (CVN 79), as well as several of the service's amphibs such as the LX(R) and its third big-deck America-class amphib, LHA 8.

Testing is slated for next year and technical development of EASR is now underway, Navy officials said.

“EASR is a SPY-6 variant, using identical hardware, signal processing and data processing. EASR will have the additional capability of air-traffic control radar, which ADMR does not have,” a senior Navy official told reporters last year.

Much like SPY-6, EASR is engineered to be cyber-hardened and reliable, according to Raytheon statements.

The AN/SPY-6 is described by radar engineers as being 35-times more powerful than most-current ship-based radar systems; developers say it enables detection of objects twice as far away and half the size compared with existing radars.

In radar terminology, a 15-decibel increase with AMDR translates into roughly 35 times more power and sensitivity compared to the existing AN/SPY-1D radar.

AMDR (AN/SPY-6) consists of S-band and X-band radars and a radar suite controller. Together, the technologies are able to scan, track and search the horizon and surrounding area for threats by sending an electromagnetic signal into the atmosphere, then analyzing the return signal of what it hits. The information can provide dimensions of a missile or other incoming threat by identifying its size, shape, location and trajectory.

Similar to its predecessor, the Aegis AN/SPY-1D radar, the AMDR includes a phased-array radar, Navy officials said. The S-band radar is engineered for long-range detection, whereas the X-band radar performs the over-the-horizon search capability, according to the service.

AMDR is optimized for anti-air and ballistic missile defense missions but is also capable in the anti-surface and counter-battery arenas.

Much like today’s AN/SPY-1D radar, the AMDR will be able to scan the surface as well, assisting with the fire-control technology needed to identify where an incoming threat can be intercepted.

There is much discussion about how the USS Ford and USS Kennedy's massively-increased onboard power technology, driven by four 26-megawatt generators, will potentially enable emerging weapons, such as defensive lasers and railguns.

“Besides carrying over 75 warplanes, the USS Ford (and the USS Kennedy as well) have some serious destructive capability. Engineers and designers included ESSM (Evolved Sea Sparrow Missile), RAM (Rolling Airframe Missile), and a Mk-15 Phalanx CIWS,” a report from Engineering.com writes.

Fast moving modern threats are inspiring a new generation of ship-defense technologies for Navy carriers, to include interceptor missiles, torpedo defenses, electronic warfare and even lasers. These systems are being stepped up on the USS Ford and USS Kennedy due to emerging weapons from potential adversaries such as hypersonic missiles, long-range anti-ship weapons and electronic warfare attacks.

This is particularly true in light of the often discussed threats of Chinese DF-21D “carrier killer,” a long range anti-ship guided missile reported to reach ranges greater than 900 miles. The Chinese DF-26 is also cited in a Pentagon report on China's military as being a source of considerable concern.

There is much discussion about how the USS Ford and USS Kennedy's massively-increased onboard power technology, driven by four 26-megawatt generators, will potentially enable emerging weapons, such as defensive lasers and railguns.

The USS Ford is expected to deploy with the Evolved Sea Sparrow Missile Block 2, or ESSM, a weapon designed to track and destroy incoming enemy supersonic missiles and anti-ship missiles, among other threats.

The ESSM Block 2 is engineered with what’s called an active guidance system, meaning the missile itself can achieve improved flight or guidance to its target by both receiving and actively sending electromagnetic signals, Navy and industry ESSM developers told Warrior Maven in previous interviews.