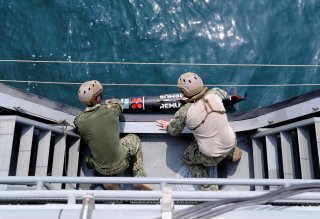 Current efforts include the integration of the AQS-20C towed sonar system with the Barracuda mine-hunter drone. These advanced systems will be supported by manned and unmanned vessels.

Progress in testing, integration, and production has revealed new breakthroughs in technology that is capable of autonomously identifying and destroying mines. While countermine technology is nothing new, current developments indicate that the Navy has achieved long-standing goals in the realm of countermine warfare.

Leading Navy thinkers have been well aware of the threat posed by mines for years, and many have come to believe that mine-hunting capabilities will only become more important. A 2017 report from the Naval Postgraduate School identifies five key areas that the Navy must focus on in order to stay in front of the growing mine threat. Interestingly, the areas identified in the essay align very closely with the recent efforts of the Navy and Raytheon. The capabilities that the report identifies as most important—“sensor range and resolution, automatic target recognition, and acoustic communications bandwidth”—are entirely consistent with the aims of the AQS-20 and Barracuda programs.

In addition, the study specifically anticipates that “improvements to sensor range and resolution can be achieved by utilizing synthetic aperture sonar.” Sure enough, that is exactly what the AQS-20 does. The overlap between the report and the AQS-20 system demonstrates how research on anticipated threats informs the Navy’s innovations. Industry partners often invest internal funds in efforts to align with or anticipate what the Navy will need to address emerging threats.

By highlighting the need to reduce the “detect-to-engage” timeline, the report anticipated the recent effort to significantly reduce the sensor-to-shooter time of mine-hunting systems. Notably, this is what the networked Barracuda and AQS-20 systems are specifically engineered to do.