The Navy's New Mini-Nuclear Warheads Are A Really Bad Idea 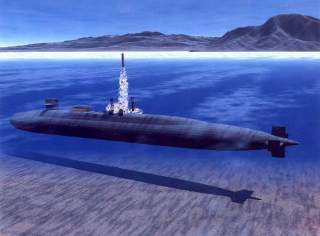 Why Does America Need New Mini-Nuclear Warheads for Its Submarines?

In late 2019, the USS Tennessee, an Ohio-class sub, received new low-yield W76-2 warheads to replace high-yield warheads on some of its Trident missiles, according to the Federation of American Scientists.

“We estimate that one or two of the 20 missiles on the USS Tennessee and subsequent subs will be armed with the W76-2, either singly or carrying multiple warheads,” FAS said. “Each W76-2 is estimated to have an explosive yield of about five kilotons. The remaining 18 missiles on each submarine like the Tennessee carry either the 90-kiloton W76-1 or the 455-kiloton W88. Each missile can carry up to eight warheads under current loading configurations.”

The U.S. military doesn’t discuss the deployment of nuclear weapons as a matter of policy. But it’s no secret why the Trump administration wants them. To understand why requires an appreciation of the unwritten rules that have governed the U.S. vs. Soviet Union/Russia nuclear arms race since 1949. The U.S. government fears that Russia is embracing a new military doctrine that envisions selective use of tactical nuclear weapons, such as during a conflict in Eastern Europe and the Baltic States. Some estimates place the Russian tactical nuclear stockpile at 1,200 to 5,000 warheads. That’s far less than the 20,000 or so tactical nukes the Soviet Union, but far more than the U.S. stockpile, which has shrunk from about 9,000 warheads in 1980 to around 230 today. Unlike Russia, U.S. tactical nuclear weapons are mostly bombs dropped by aircraft, rather than missile warheads.

The nightmare scenario for Washington is a sort of nuclear blackmail, in which Russia employs tactical nuclear weapons, perhaps to disrupt NATO forces responding to a Russian invasion of the Baltic States. This would force the U.S. to either not retaliate with its own nukes, or use ICBMs and warheads that might trigger all-out thermonuclear war. In addition, increasingly sophisticated Russian air defenses, such as the S-400 missile, raise concerns that nuclear-armed U.S. aircraft might not be capable of penetrating Russian defenses.

The Trump administration’s 2018 Nuclear Posture Review called for “a low-yield SLBM warhead to ensure a prompt response option that is able to penetrate adversary defenses. This is a comparatively low-cost and near term modification to an existing capability that will help counter any mistaken perception of an exploitable ‘gap’ in U.S. regional deterrence capabilities.” This weapon would be a modified W76-1 warhead, called the W76-2, which “provides a low-yield option capable of overcoming adversary air defenses,” according to a July 2018 National Nuclear Security Administration report to Congress.

In other words, a new tactical nuclear weapon is supposed to convince Russia that the U.S. could respond in kind to Moscow’s use of tactical nukes. Delivering the warhead by sub-launched ICBM means Russian air defenses can’t stop it.

Unfortunately, there are questionable assumptions behind this thinking. The Cold War witnessed similar fears of nuclear blackmail if one superpower or the other fell behind in the arms race. Yet no one has employed nuclear weapons – tactical or strategic – since 1945. Perhaps that’s because the leaders of the U.S., Russia and other nuclear-armed states have realized that the nuclear threshold is crossed, events could easily spiral into full-scale atomic war.

Then there is the whole idea of using ICBMs to deliver mini-nukes. Just as with Prompt Global Strike, a controversial idea to mount conventional warheads on ICBMs, the problem is that no one can be sure whether the nose cone of a strategic ballistic missile contains high-explosive or a hydrogen bomb.