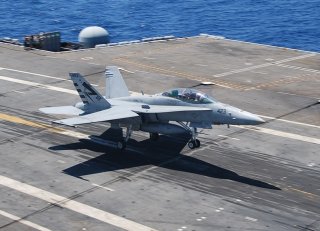 The StormBreaker is a winged air-to-ground munition designed to negate the advantage that ground based enemies enjoy during poor visibility operations due to fog, dust, darkness, smoke, or other factors that reduce visual range.

Cristy Stagg, the StormBreaker program director said that the “StormBreaker is the only weapon that enables pilots to hit moving targets during bad weather or if dust and smoke are in the area,” which will give American pilots a battlefield advantage. “Super Hornet pilots will be able to use poor visibility to their advantage when StormBreaker integration is complete.”

In order to remain locked on target, the StormBreaker uses a three-mode seeker. According to the Raytheon StormBreaker website, the seeker uses millimeter wave radar to detect and track targets through weather, infrared imaging for “enhanced targets discrimination,” and a semi-active laser that allows the winged munition to track with a ground-based laser target designator.

All Weather, All Day

Raytheon touts the StormBreaker as an “all-weather solution that enhances warfighters’ capabilities when visibility is limited.” The StormBreaker’s relatively small size allows jets that are equipped with the new system to carry a higher weapon load out than would otherwise be possible with larger air-to-ground missiles or other precision weapons. According to The Drive, a defense website, the F-15E Strike Eagle can carry as many as 28 StormBreakers on four purpose-built racks that can hold seven StormBreakers each—a pretty astounding number of weapons that expands the capacity of the F-15E’s existing hard points.

Since the StormBreaker has wings, it gives aircraft an improved stand-off capability by gliding towards a designated target. Depending on release altitude, the StormBreaker has a range of up to 45 miles, or a bit more than 70 kilometers. Due to the fact that the StormBreaker is a gliding-type munition, it also has the ability to hit both mobile and static targets.

On paper, the StormBreaker sounds like a pilots’ dream, though program testing has been far from perfect. The Government Accountability Office reports that the StormBreaker program “completed 56 mission scenarios and reported 11 failures,” which is far from a stellar record. Of the failures, “eight were software related and are being addressed through new software releases, two were hardware related and corrective actions have been implemented, and one was the result of an anomaly with the guidance component.”

Once testing is completed, the F-18 Super Hornet will be the second American jet able to field the precision weapon, and Raytheon expects the program to reach “initial operational capability later this year.” The StormBreaker finished platform integration with the F-15E Strike Eagle fighter jet in 2018. In addition to the testing announced for the F-18 Super Hornet, the munition is also being integrated for use with the F-35 platform.