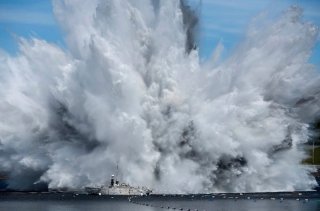 The shock testing included the detonation of explosives in a pond at Aberdeen Proving Grounds in Maryland. Shock trials ensure the vessel is prepared for the dangers of combat. Explosives are set off within a predetermined proximity of the boat to assess the effects of the explosion.

The UISS is an unmanned surface vehicle engineered to use sonar and other mine-detection technologies to help find and destroy minefields. It’s important to determine whether the UISS could continue to function after being exposed to nearby explosions.

Capt. Gus Weeks, Program Manager for LCS Mission Modules, said the engines for the UISS were running during the test to ensure the boat does not lose power “once the explosive event happens.”

“Power is the system which can be lost in the minefield,” Weeks said. “It has to be able to continue to operate after the explosive event.”

Shock trials for the UISS is an essential part of preparing a new suite of mine countermeasures for the Navy, which includes an ability to discover, locate, and destroy or avoid dangerous sea mines. Some mines are tethered to the ocean floor built to explode on impact, whereas others have sensors and are programmed to explode when a ship comes within a certain distance. Mines are relatively inexpensive and easy to deploy, as they are a simple, effective way to deny a force entry or access to certain high-value waterways. Drones that can conduct minesweeping operations can help manned and unmanned assets access these areas safely.

Improved autonomy can accelerate the effectiveness of minesweeping operations. Small groups of minesweeping drones can share real-time information with one another and make necessary adjustments to navigate mined areas. Growing levels of autonomy and networking can enable one UISS to gather, analyze, organize, and transmit threat information across a force of drones to send information to manned ships performing command and control.