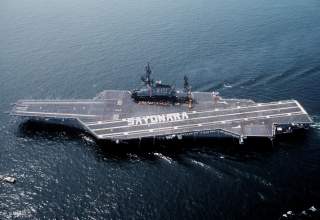 Key point: This aircraft carrier did its duty and shows the durability of American warships.