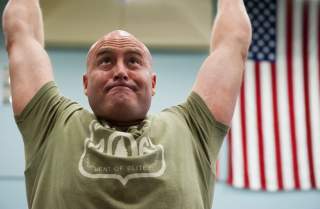 The Army's size puts it in greater need supporting soldiers in their physical fitness.

After nearly two decades of grinding low-intensity conflict, the U.S. military is shifting to focus on near-peer competition — and tailoring its physical fitness requirements accordingly.

The Army is currently two-year assessment and rollout plan scheduled for 2020, with 470,205 soldiers are currently racing to prepare and train for a dramatically different six-event Army Combat Fitness Test (ACFT), developed in reaction to both the demands of modern conflict and to the declining health and fitness standards of incoming recruits and soldiers. After all, overweight and physically unfit soldiers degrade readiness, take up time and resources, and burden others.

To meet this lofty goal, the Army must undertake the most significant changes to physical fitness testing since the beginning of the professionalized force in 1973 — one that, unfortunately, it is ill-equipped to tackle for a simple reason: it has no up-to-date training apparatus to support the transition. While the new standard may be important for lethality, the Army must consider innovative ways to prepare both recruits and soldiers to successfully implement this new standard — or else risk a significant impact on readiness as the military enters into strategic competition with China and Russia.

Many soldiers and analysts have pointed out the logistical and financial hurdles of rolling the ACFT out across the force (both active duty and reserve components). Similarly, those working on the changes and others in the Army have argued the ACFT is based on 'science' to help prevent against musculoskeletal injuries (the most common reason for non-deployable status) and better prepare soldiers for the physical demands of combat. There is also hope that a more comprehensive test will encourage a culture of fitness beyond "training for the test."

However, the Army must more seriously consider how to evaluate and train soldiers so they do not incur additional injuries preparing for the test, ensure initial training is rigorous but not damaging, tailor training for women and men, and overhaul physical fitness training.

For solutions, look no further than to our strongest allies. Armies in Australia, New Zealand, and the United Kingdom also are facing similar challenges about fitness, recruiting, and gender-neutral combat readiness tests as the United States.

How the other half fights

Similarly, in September 2018, the British Army rolled out a gender- and age-neutral six-event fitness test (called Physical Employment Standards or PES) for combat arms (called Close Combat Soldiers). The British Army is also moving away from running in recognition of changing combat necessities and the need to reduce cardiovascular and musculoskeletal strain. Currently, musculoskeletal injuries account for 60 percent of medical discharges, with higher rates among women. Subsequently, the UK aims to achieve improvements with "properly designed, progressive physical training programmes."

British Army fitness has a certain cult following and is known for whipping people into shape. The British Army has had the professionalized Royal Army Physical Training Corps (RAPTC) since 1860, consisting of full-time physical fitness instructors assigned to most units across the Army to improve physical fitness and assist with rehabilitation. The position is not eligible for direct accession, and qualifying soldiers must go through a full 30 weeks of training.

In addition to RAPTC, British PTIs maintain their primary job but attend an 8-10 week course on physical fitness and serve as an additional physical fitness resource at the company level. PTIs are volunteers who are also qualified health trainers and undergo refresher courses every five years. This professionalized and holistic health perspective allows the British Army to better support its soldiers and be flexible responding to new standards or physical demands.

In comparison, since 2014 Army Master Fitness Trainers (MFTs) receive a secondary military occupational specialty (MOS) after attending only a 3-week course. These MFTs advise on physical fitness assessment and exercise prescription and are supposed to assist commanders in designing fitness programs every 1-3 months. One concern is units' tendency to send soldiers a unit can afford to miss who be neither high performers nor interested in the topic.

The Army will face significant hurdles supporting soldiers in the transition to the ACFT without qualified and motivated instructors in both the active and reserve components. While assigning physical fitness instructors at the company level throughout the Army may raise concerns about cost, it is worth weighing their cost against the cost of the remedial training the military currently provides (recycling recruits or Fitness Training Units) and its high injury rate.

The effectiveness of institutionalized fitness as central to Army life should be questioned. Without fully instructing, enabling, and supporting general fitness in the army, soldiers will spend inordinate time preparing for the ACFT, perhaps at the detriment of other critical areas. Standout solutions from other countries for supporting fitness that include fitness training programs and phone apps, full-time physical fitness instructors, and revisions of physical fitness courses to focus on weight lifting rather than running are just some suggestions.

Right now, the Army offers little to work with. The Army's main preparatory program is the Army Physical Readiness Training (PRT) system, which is insufficient in fostering a culture of fitness, let alone preparing soldiers for the rigors of combat. While PRT is an exhaustive manual aimed at developing a baselineof strength, mobility, and endurance to address movement deficiencies, a first step in preparing the force for a more demanding test and challenging conflict is acknowledging that many Americans will be disqualified based off weight and fitness and the subsequent necessity of remedial training. Unfortunately, GoArmy.com's Pocket Physical Training Guide and app designed to help recruits prepare for military service are both premised on PRT.

PRT, which emphasizes calisthenics and running rather than weight training, is not practical outside of remedial training. PRT serves as a baseline; as the new ACFT and the British combat test reflect, preparing for combat demands cross training, weight training, and functional fitness. PRT is fundamentally boring, failing to engage soldiers in exercise, instill a culture of fitness, or develop group morale and cohesion.

Two institutional attitudes further prove PRT is detrimental. First, "if you don't understand, it you're doing it wrong" is misplaced because a comprehensive and effective fitness program should be understandable. Second, "personal fitness is a responsibility" absolves Army leadership from actually having to prepare soldiers to be physically fit. Not only does the Army need to comprehensively include weighted resistance training, it needs to offer better resources for aspiring soldiers.

Other countries are tackling these constraints head on. In response to changing fitness abilities among recruits and soldiers, other countries have implemented screening practices for recruits and now offer resources. Germany has implemented a 3-week physical fitness training program for recruits during which recruits are screened for their level of fitness to determine if they can get into shape and meet fitness standards rather than automatically disqualifying.

Responding to similar shifts in fitness and ability in the general population, the Australian Army now assesses potential recruits and assigns a 4-6-week program to those who cannot meet standards. Should the recruit need additional training, they are assigned a 6-12 month program. Australia furthermore offers women a 7-week Female Initial Training Preparation course to prepare them for military training.

New Zealand offers Force Fit, an app specifically to prepare new recruits for the defence fitness test with 6 and 8 week programs available, as well as group classes in certain cities throughout the country. The British Army offers the 100% Army Fitapp as well as a popularized 16-week fitness programme. While these apps primarily focus on baseline fitness and body weight exercises, the British Army also publishes how-to videos for harder workouts.

The Army's size puts it in greater need supporting soldiers in their physical fitness. As demonstrated by other countries, professionalized physical fitness trainers assigned on the unit level is one solution. The Army has said it plans to "put strength and conditioning coaches, athletic trainers, physical therapists, sports psychologists, and dietitians in each brigade." Also under consideration is a modified 3-event test for injured soldiers, giving nod to the impracticality of the current test for everyone in the force.

Some battalions are thinking about fitness differently, offering comprehensive fitness and nutrition guidance to meet health goals. In 2016, the Army announced it would dedicated $355 million over four years into holistic health and fitness to include nutritionists and physical therapists. Fitness, however, requires more guidance than stipulating new testing requirements; these additional resources should promptly be rolled out service-wide.