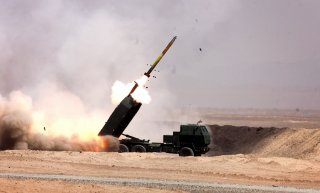 Can Russia’s terror campaign with these ground fired-weapons be stopped? The Pentagon has an idea and is now finally sending 155mm M777 mobile Howitzers which may help this effort. However, there are also a variety of proven interceptors, technologies, and detection systems capable of tracking and, in some cases, even destroying incoming missiles. Would the Ukrainians benefit from advanced ground-radar systems and integrated defense systems such as Counter Rocket Artillery and Mortar (CRAM) systems?

CRAM, in existence now for many years, uses a Phalanx “area” weapon able to fire hundreds of projectiles to blanket an area, effectively intercepting or taking out incoming mortar, artillery, or even some rockets in the process. It is a close-in defense, however, and when networked with radar and fire control, CRAM can offer a substantial defense against a range of enemy ground attacks. Should the United States give Ukraine CRAM weapons to protect some of its crucial high-value target areas from incoming Russian ground attacks?

Along similar lines, long-range, precision, ground rockets such as the GPS-guided Multiple Launch Rocket System would allow Ukraine to pinpoint and strike enemy targets from ranges out to 80 km.  This, in tandem with some kinds of precision artillery, could help neutralize Russian missile launch sites which could be located by aerial drones performing surveillance missions. Interestingly enough, Ukrainian president Volodymyr Zelensky may be thinking in a similar fashion, as he specifically requested “MLRS” as part of what he needed in an interview with CNN. MLRS, for Multiple Launch Rocket Systems, are the precursor to the precision-guided GMLRS which can mount on and fire from a truck. These weapons, if supported by effective fire control and surveillance, could be extremely effective in tracking and destroying Russian launch locations.

However, many of Russia’s missile launchers are likely road-mobile and might need to be targeted with munitions able to change course in flight, or targeted from the air. The United States is quickly developing this technology, and already has it in certain areas, but it is not clear if Ukraine has or could acquire these kinds of maneuvering munitions. Nevertheless, an ability to find and take out non-maneuvering or even temporarily “fixed” launchers could change the equation in terms of safeguarding Ukrainians from indiscriminate Russian rocket and missile attacks. Ukrainian civilians would certainly welcome such a reprieve.

There is yet another weapons system which could be equally or more impactful, which Zelenskyy has not requested so far: the High Mobility Artillery Rocket System (HIMARS). HIMARS relies on truck-fired rockets to destroy fixed targets as far away as 300 miles, a range that would offer Ukrainians the capability to reach and destroy Russian force concentrations, convoys, and launch sites at thus far unseen distances.

Finally, there is the question of the Patriot missile, a combat-tested ballistic and cruise missile interceptor able to find and destroy incoming short and intermediate-range ballistic missiles. When asked about whether the Patriot would be deployed to Ukraine, Pentagon spokesman John Kirby said that the United States would not send it, given that it would require U.S. personnel on the ground in Ukraine to operate it. While the United States remains unwilling to send U.S. troops onto the battlefield in Ukraine, other options are available. For instance, U.S. troops could train the Ukrainians to use the Patriot themselves. Further, America’s European allies may have equivalent systems with a Patriot-like interception capability that could be sent to the front. Could Israel be convinced to send in its Iron Dome? Given that Russian forces are already struggling to advance against Ukrainian defenses, these options are worth considering. If the West is able to destroy, hinder, or reduce Russia’s long-range rocket and missile fire, it could prove decisive and end Russia’s relentless shelling campaign once and for all.