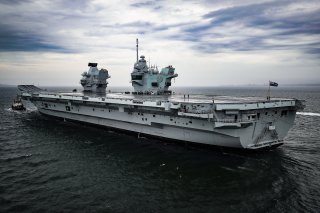 The UK's "Royals" haven't always been known for their composure. For every more reserved member of the family, there have been those known for wild exploits. This time however it isn't technically a party boy prince that is upsetting folks, but rather the Royal Navy's latest warship, HMS Prince of Wales (R09) that has found itself in the spotlight for being a bit too loud and brash!

The 65,000 ton Queen Elizabeth-class aircraft carrier returned to her homeport at Portsmouth Naval Base, Hants, a month ago and has been running her massive diesel generators instead of being hooked up to a land-based power supply.

The aircraft carrier is powered by four Wärtsilä diesel generators, which each produces a total of 11 Megawatts of power, or enough to sustain a town with a population of 25,000 people. However, the warship's engines are so loud that locals have complained of "incessant noise pollution" that has even kept nearby residents up at night.

One local resident, Neil Sutton, told the Mirror newspaper that he and his family had to keep "our heads under our pillows at night." He added, "In this lockdown, why can we not open our windows and enjoy peace and tranquility?"

It is Royal Navy policy to provide short power to all vessels alongside whenever possible.

The UK's Ministry of Defense spent £200 million on a new shore-based electric power plant designed to support naval vessels at their home base, but it is still undergoing trials. As a result of many ships, including the Royal Navy's two brand new aircraft carriers, must rely on their diesel engines while in port for power.

Gosport councilor Dawn Kelly has called on the Royal Navy to look into the noise problem.

"For those living in Clarence Yard the sound must be even louder as it gets reverberated around the square there," Kelly told The Daily Mail. "So I do think the residents have a valid complaint and I have urged them to approach environmental health."

The problem has been ongoing since late March when the £3.1billion HMS Prince Of Wales returned home after its sea trials. The warship also had an eight-day stay in Liverpool where more than 20,000 members of the public had a chance to go aboard and meet some of the 700 sailors who are severing on the new carrier. During its month-long trip, the ship also carried out training exercises including a crash on deck scenario as well as fuel replenishment at sea.

The Prince of Wales was launched in 2017, and the 919-foot carrier has an air wing that includes 36 fighter planes and four helicopters. The actual Prince of Wales, Prince Charles and his wife Camilla attended an official commissioning ceremony to formally welcome the aircraft carrier into the Royal Navy last December. Charles, 71, was also given a new title, Honorary Commodore-in-Chief, Aircraft Carriers.

Prince of Wales and her sister ship, HMS Queen Elizabeth, are the largest and most advanced ships ever to see service in the Royal Navy. HMS Prince of Wales (R09) is the eighth and most recent ship to have borne the name. The previous HMS Prince of Wales (53) was a King George V-class battleship launched in 1939 and sunk off the coast of Malaysia during World War II.