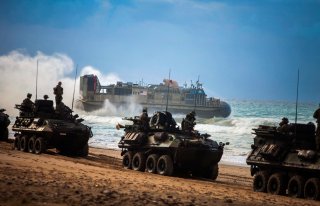 The new United States Marine Corps' Amphibious Combat Vehicle (ACV) is now operational and preparing to deploy from U.S. Navy big-deck amphibious warships from miles off-shore into hostile territory. This represents the fulfillment of a long-anticipated capability that is expected to give U.S. military commanders an unprecedented ability to both travel from ship to shore and extend penetrating land attacks deep into enemy territory.

The Corps is going to deploy its new BAE Systems-built ACV as a way to bring new, innovative assault tactics into the modern era. The new amphibious attack ship-to-shore combat vehicle is intended to significantly expand the mission length for amphibious assaults well beyond the current Amphibious Assault Vehicle (AAV).

The Marine Corps' new configuration is aligned with an emerging Navy-Marine Corps amphibious assault strategy which, among other things, sees a need for extended penetration into land defenses after an initial beachhead is established.

The new vehicle is designed for long-range, sea-land combat operations; it uses ocean water to cool its engine so as to enable it to carry up to 200 gallons of fuel—enough for a 365-mile mission. While the new ACV can travel roughly 13 miles through water, at about six knots from ship to shore, it can hit speeds of 60mph on land to travel hundreds of miles inland.

Unlike existing tracked AAVs, the new ACVs are 8X8 wheeled vehicles engineered for greater speed, maneuverability, and survivability on land. By removing the need for torsion bars, a wheeled vehicle such as the ACV can build a v-shaped hull for additional protection, speed, and combat durability, BAE Systems developers said.

The new vehicle weighs 30 tons and has a digitized driver's instrument panel. The existing new ACVs are armed with .50-caliber machine guns, and engineered with an unmanned turret that can integrate a 30mm gun, should the Corps request it. It also makes use of a stronger 700hp engine, compared to the AAVs 400hp engine.

The introduction of the new ACV into the fleet aligns with the Navy and Marine Corps's emerging strategic approach to amphibious attack aimed at leveraging fifth-generation air support; launching more dispersed, disaggregated yet "networked" assaults; and using smaller unmanned vessels to perform reconnaissance, countermine, and attack missions. A more dispersed amphibious attack force not only reduces its vulnerability to enemy fire but can also use advanced Command, Control, Communications, Computers (C4) Intelligence, Surveillance and Reconnaissance (ISR) and networking to better identify key points of attack across a wider area. This amphibious approach is consistent with the Marine Corps vision outlined in the services' recently published Force Design 2030.

The emerging ACVs will launch from big-deck amphibious ships, called landing helicopter assault (LHAs) ships, and amphibious transport docks (called LPDs). With one of the upcoming LHA America-class amphibious ships bringing back the well-deck, the Corps plans to emphasize ship-to-shore water-launched combat vehicles. At the same time, Navy leaders emphasize that the first two America-class vessels, LHAs 6 and 7, are built with an aviation emphasis to, among other things, capitalize upon the F-35B Joint Strike Fighter and other air-launched elements of amphibious attack. These aviation-centric big-deck amphibious ships are intended to pave the way toward the upcoming LHA 8.

The entire strategic and conceptual shift is also informed by an increased "sea-basing" focus. Smaller multi-mission vessels, according to this emerging strategy, will be fortified by larger amphibious ships operating as sovereign entities at safer distances. Corps leaders explain that these big-deck amphibious ships would operate as "seaports, hospitals, logistics warehouses and sea-bases for maneuver forces."

Additional land-attack firepower and survivability seem aligned with the Corps' newer, more "dispersed" amphibious assault strategy; if amphibious incursions occur in narrow, more spread-apart scenarios, landing forces will potentially need to engage in more land-fighting without large numbers of forces nearby. They will likely rely more upon air support; long-range fires; and "networked" intelligence from other ISR nodes, command and control ships, or elements of the force—to find and exploit landing areas most advantageous to the attacking force.