The New Capabilities of the Old Joint Light Tactical Vehicle 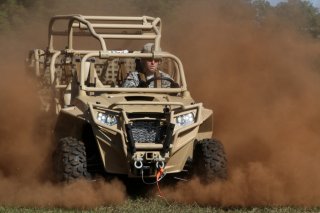 While it may have come to life during the years of improvised explosive devices, terrorist attacks, and counterinsurgency operations, the Army and Marine Corps

The Joint Light Tactical Vehicle (JLTV) is being adjusted, upgraded, upgunned, and powered up for major mechanized warfare.

While it may be a tactical vehicle designed during the Afghan-Iraq era, the JLTV has also since its inception been envisioned as a platform able to perform lethal war missions in major combat against a “peer” adversary.

“We can integrate just about any weapon,” George Mansfield the vice president of joint programs for Oshkosh Defense told the National Interest.

Now the Army is taking this vision to a new level by up-gunning the JLTV with mortars, guns, and a Spike Non-Line of Sight Launch System (NLOS), a self-contained missile launcher system capable of tracking and destroying targets with precision from great distances. Some of the Pentagon’s European military partners are now armed with the system, according to Oshkosh Defense weapons developers. The JLTV was recently armed with the Spike NLOS in Estonia in a test designed to show that the missile can hit targets up to thirty-two kilometers. The Spike NLOS, a missile system developed by Israel, can track and destroy drones, helicopters, low-flying fixed-wing aircraft, and even ground targets parallel to the vehicle on the ground.

A live-fire demonstration of the weapon system, hosted by the Estonian Navy, emphasized cross-domain connectivity. After all, the missiles can be fired at landing craft, enemy ships such as Corvettes, and even small, inflatable commando rigid inflatable boats. On land, the SPIKE NLOS can enable target identification and precision strike against enemy tanks, armored vehicles, or even advancing enemy infantry, according to an Oshkosh press statement.

The targeting and fire control system connecting the NLOS SPIKE to the JLTV includes an ability to redirect and course-correct in flight as new information arrives.

“It has a bi-directional data link, enabling full control of the missile from launch up to target hit with pinpoint precision that is not affected by range,” according to the press statement. “Unlike laser-guided or active radar munitions, the SPIKE NLOS electro-optical guidance is completely passive and is capable of operation in GPS-denied environments.”

The Oshkosh JLTV has also been armed with transportable, built-in 120-millimeter mortar weapons able to fire on elevated enemy positions while on the move in combat.

A more heavily armed JLTV has the ability to introduce new tactical dynamics for ground commanders who might be primarily inclined to use the vehicle for scouting, reconnaissance, or small group troop transport missions.

A missile-armed JLTV could help provide air and missile defense for tactical and combat vehicles moving in convoys or attempting to make contact with an enemy. It could also open up new possibilities for direct attack. The speed and off-road ability of the JLTV might enable new possibilities for combat maneuver in areas less accessible to heavier forces or larger tactical trucks ill-equipped to travel off-road. Oshkosh Defense’s well-known TAC-4i suspension, an intelligent system autonomously able to adjust to the terrain below using compressed nitrogen, enables this maneuverability. The concept allows for specific rapid, on-the-move adaptations to terrain in real-time to improve mobility, durability, and survivability for soldiers traveling inside.