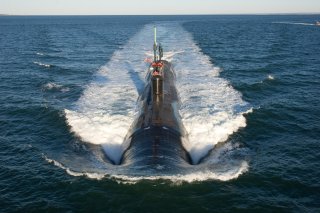 Submarine hunting appeared to take center stage in the exercises, as Global Times reported that the Y-8 dropped a number of sonobuoys for the “wide-range” detection of submarines. However, it is not clear how precise or effective these sonobuoys are and whether they would be able to actually detect adversarial submarines in a combat scenario.

The Chinese paper said the sub-hunting exercise was successful.

“The Y-8 anti-submarine warfare aircraft dropped sonobuoys for wide-range detection, the Ka-28 helicopter assisted in precision locating, and the destroyer conducted thorough search. After locating the target, the destroyer conducted a simulated attack and immediately released countermeasures for defense,” the Global Times reports.

China’s focus on submarine hunting in waters near or around Taiwan, Japan, and the South China Sea makes sense. China is well aware that the U.S. Navy has frequently sailed its Virginia-class attack submarines in the area, and that the vessels provide the United States with a substantial undersea advantage. While many details pertaining to the Virginia-class submarines’ locations, mission objectives, and technological capabilities are classified, these Tomahawk-armed undersea platforms have successfully leveraged several key innovative technologies intended to improve “quieting” and minimize detection.

The Virginia-class submarines’ undersea surveillance capabilities, ability to launch undersea drones, and capacity to deliver significant amounts of torpedo and cruise missile firepower are likely to prove decisive in any kind of confrontation with the PLAN. In fact, these U.S. Navy attack submarines could be a primary reason why a Chinese amphibious assault on Taiwan could be destroyed, and why Chinese military planners in Beijing are hesitant to assault the island nation. Should they remain undetected or out of range, the Virginia-class submarines could launch armed mini-drones to locate Chinese ships; fire next-generation, precision-guided torpedoes; and even deploy small teams of highly-lethal Special Operations forces for targeted attack or scout missions.