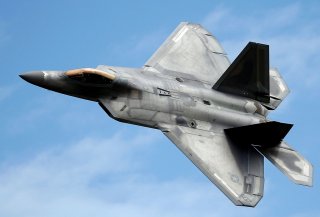 Hitting high-speed supercruise, firing air-to-air weapons, providing ground support and engaging in dog fights are all essential elements of the F-22 testing protocol. In fact, these areas of focus now improving with the Air Force’s first use of a new in-flight navigational data system for the stealth fighter.

It’s called a Common Range Integrated Instrumentation System (CRIIS), and is described in an Air Force report as being able to capture valuable Time-Space-Position Information (TSPI). This kind of data is indispensable to F-22 testing and for improving the plane. After all, what is the use of conducting the full range of combat maneuvers if the data from the testing cannot be collected and analyzed for training purposes?

As a result, CRIIS just completed its first flight at Edwards Air Force Base, California.

“The ability to record and utilize TSPI in real-time is a foundational piece of what we do. It is a critical enabler, which unlocks many of the tools the experts use to verify the performance of everything from fire control radars, to datalinks, to new or upgraded munitions,” Lieutenant Colonel David Schmitt, 411th FLTS and F-22 Combined Test Flight Director of Operations, said in an Air Force report.

Improved methods of data gathering and analysis for in-flight F-22 test operations are of great significance given recent upgrades to the F-22. Due to a software upgrade over just the last few years called 3.2b, the F-22 is now operational with upgraded variants of the AIM-9X and AIM-120D air-to-air weapons. Cutting-edge technology such as CRIIS, allows the F-22’s new margin of difference and improved air combat performance to be measured effectively.

It would seem self-evident the CRIIS would bring an improved ability to catalogue the performance of the AIM-9X’s and AIM-120Ds guidance systems, sensors and improved datalinks. It also goes without saying that these kinds of weapons improvement change the F-22’s tactics and aerial maneuvers given the difference in attack capabilities. Perhaps F-22s can now attack at safer stand-off ranges? Perhaps a new envelope of previously unreachable targets are now available by virtue of improved guidance technology?

Having a vastly improved navigational and flight data-gathering instrumentation technology will likely have a huge impact upon the effectiveness of lessons-learned which typically accompany weapons testing. Part of this aligns with the strategic approach outlined by the Commander of the Air Force Test Center, Major General Christopher Azzano, who told The National Interest that the testing process consistently works to imbed and assess the most cutting-edge technologies possible.