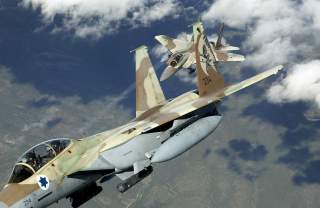 As detailed in this earlier article, the F-15X would feature modernized defensive countermeasures, computers, and sensors, would be cheaper to operate than aging F-15Cs, and could potentially carry up to twenty-two missiles, up from eight. But unlike the F-35, it is in no way a stealth jet.

Currently, the 2019 U.S. defense budget allocates $1 billion for development and low-rate production of eight F-15Xs, which could spearhead future orders for at least forty-eight, and as many as one hundred and forty forty.

Reportedly, the Israeli Defense Force is struggling with the same choice. In June 2019, Arie Egozie wrote in Aerospace magazine that Israel had issued a Request For Information to Boeing on a potential order of 25 F-15Xs.

But the IDF would also like to order twenty-five more F-35s for a third squadron—but may struggle to pay for those and twenty-five F-15Xs.

In July, Egozie further detailed in an article for Breaking Defense that the IDF foresaw that either the F-15X or F-35I orders would cost an estimated $2.5 to three billion dollars each.

As there is some debate as to whether the F-15X is in fact cheaper than the F-35, it’s interesting that the article reports the IDF does not “…see any significant difference in the two airplanes’ operations and maintenance costs.”

Israeli Eagles: From the Baz to the Ra’am

The IAF has had a love affair with the fast, long-range and heavy-lifting Eagle since it received its first F-15As and two-seat F-15Bs in the late 1970s. The IAF modified the purely air-to-air jets to carry bombs and over the years fitted them with various domestically developed missiles, conformal fuel tanks, reconnaissance pods, and defensive systems. Israeli Eagles shot down dozens of Syrian jets over Lebanon in 1982 without loss and flew long-distance raids hitting a PLO camp in Tunisia and nuclear reactors in northern Syria and Iraq.

Today, fifty heavily upgraded F-15A-D Baz (“Falcon”) jets serve as multi-role fighters in the IAF. Israel has been passed on additional F-15s as recently as 2017, when it acquired for free nine F-15Ds retired by the U.S. Air National Guard and began converting them to the Baz standard.

In the mid-1990s, the IAF also ordered twenty-five F-15I Ra’ams (Thunders), a special Israeli-customized model of the two-seat F-15E Strike Eagle ground-attack fighter. The Strike Eagle has more modern avionics and is designed from the outset to carry enormous weapon loads. Compared to a standard F-15Es, the Ra’am has Israeli-built defensive systems, computers, and helmet-mounted sights.

Since 2011, Israeli F-15s and F-16Is have engaged in hundreds of strikes targeting Iranian, Syrian and Hezbollah forces in Syria. The Israeli jets have used electronic warfare and stand-off range weapons to avoid or destroy defending Syrian missile batteries. Only a single F-16I has been lost to Syrian S-200 missile in 2018, though Russia began providing Syria with more advanced S-300 systems later that year.

Meanwhile, in December 2016 the IDF began receiving the first of fifty single-engine F-35I Lightning II stealth jets and was the first country to deploy them into combat over Syria and Lebanon. The F-35I’s low radar cross-section allows them to penetrate much deeper into airspace otherwise interdicted by long-range surface-to-air missiles like the S-200 or S-300. Furthermore, their integrated sensors and datalinks make them highly effective as surveillance platforms transferring data back to friendly forces in real time.

The Eagle has a greater maximum speed, payload, and range than the F-35. While Israel has also been uniquely accorded its own bespoke F-35I Adir variant, F-15s would still be easier to modify or refit with new Israeli systems and weapons like the supersonic Rampage missile and the Spice glide bomb. Eagles may be more efficient weapons-haulers for low-risk bomb-and-missile delivery missions, as an F-35 in stealth-mode is relegated to carrying just four to six munitions in its internal bays. (The F-35 can theoretically heft respectable bomb loads externally on their wings at the expense of stealth, though this hypothetical ‘beast mode’ does not actually exist yet.)

U.S. F-35 advocates argue that it is folly to order additional F-15s because, regardless of their advantages, they would remain vulnerable to advanced anti-aircraft missiles fielded by peer-adversaries (i.e., China and Russia) in ways that the F-35 is not.

But Israel’s chief potential adversaries are Syria, Iran, and Hezbollah, not Russia or China. The IAF’s performance in Syria suggests it may be confident it can continue to evade or destroy even relatively advanced air defense systems like the Pantsir-S1 or S-300 these actors import from abroad. In fact, the F-35’s networked sensors may make it ideal for identifying targets for F-15s to engage with missiles from a safe distance.

In a 2018 article Egozie suggested that, despite internal debate, the IDF seemed to be placing a “priority for the additional F-15’s while delaying the purchase of a third F-35 squadron.” However, Egozie’s later piece indicates the debate won’t be settled until Israel holds its second round of elections in 2019 this September, called due to Prime Minister Nethanyahu’s inability to form a governing coalition due to the numerous allegations of corruption swirling around his person.

The IDF’s procurement dilemma is hardly unique: air forces across the world are facing tough choices over whether to continue procuring 4.5-generation fighters relying on electronic warfare and long-range weapons for survivability against modern threats, or fully committing to fifth or sixth-generation jets combining information superiority with low-observability to enemy radars—though possibly at the expense of speed, payload, and range.