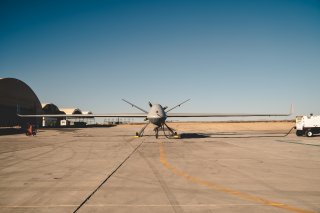 The National Guard recently completed testing of a new long-range Hellfire air-to-surface missile. The test revealed that the new missile dramatically extended the Hellfire’s range—by a factor of three.

The Hellfire missile is the United States' primary 100-pound air-launched anti-tank missile. Developed during the Cold War to decimate Soviet armor, the Hellfire found use in Afghanistan and Iraq.

Though American forces did not face a substantial Afghan or Iraqi armored threat after the initial invasions, the Hellfire missile gave the Predator drone a significant firepower boost and supported troops on the ground.

The statement explained that “during the exercise, AATC led a successful test of the new AGM-114 R-4 long range hellfire missile and the associated weaponeering software. The modified Hellfire missile can fly roughly three times as far as previous versions and resulted in the longest Hellfire shot taken to date.”

It added that “the test demonstrated the AGM-114 R-4’s ability to double the [MQ-9 Reaper drone’s] standoff range, giving the ability to engage threats while maintaining a safe distance out of the threats ability to counter-strike, which is crucial to survivability in a contested environment.”

Though recent improvements to the Predator’s hardware and software now allow the drone to fly with eight Hellfire missiles, that platform’s future is far from certain. The Predator excelled in conflicts where the United States exercised complete control from the air.

However, in a conflict against a peer or near-peer enemy—such as China or Russia—the rather slow-flying and decidedly non-stealth Predator would likely not survive. One of the solutions to keeping platforms like the Predator relevant, however, is extending the range of its munitions and therefore keeping the drone out of harm’s way.

Regardless of the extended-range Hellfire missile’s ability to keep the Predator relevant, extending the missile’s range will benefit all service branches and allies that use the American missile.