New iPad Pro: The Reviews Are In. Here's What the Expert Geeks Think. 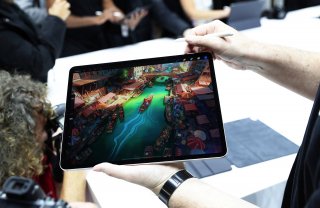 You may not be able to buy the latest iPad Pro model at the Apple Store, which is closed for the foreseeable future. But the 2020 version of the device is still available starting Wednesday, and the first reviews of the device appeared Tuesday morning. Critics called the device the best of its kind, although they acknowledge that many users would probably get most of what they want from older and less expensive iPads.

Apple announced the fourth generation of the iPad Pro device — the first arrived in 2015 - in a press release March 18. The new device will run iPadOS 13.4. It incorporates the A12Z Bionic chip, while also sporting an Ultra-Wide camera and what it calls the  LiDAR Scanner, meant for use for AR applications.

Reviewing the new iPad Pro for Wired, Lauren Goode calls it " the most powerful and feature-rich iPad yet," and rates it 9/10. Goode calls it the best iPad available — which is typically the case of any new iPad — while also noting that perfectly fine earlier models are available for a much lower price tag.

Goode also acknowledges the strangeness of considering such an expensive purchase during a global pandemic. However, she also notes that the device is "great for watching Netflix while stuck in self-isolation."

She also praised the new iPad software, which will be available on older devices, especially its support for a trackpad and a mouse. However, the new "Magic" keyboard won't be shipping until May.

Writing for The Verge, reviewer Dieter Bohn considers the question of whether iPad Pro purchasers should spend more than they would on most laptops, even if the tablet may not give them as much as a laptop can.

Bohn gives the iPad an 8 out of 10, praising the display — which he calls "beautiful, tack-sharp, and color accurate," speed and trackpad support, while criticizing the lack of a headphone jack, and acknowledges that many users won't have any use for the LIDAR feature. He also notes that the Magic keyboard isn't shipping yet. Bohn also acknowledges that perfectly fine iPads are available at lower price points.

Reviewing the new iPad at CNET, Scott Stein does not assign a number grade. But he agrees with the others that while the new iPad is the best one yet, most users should consider a less expensive one that will provide much of what they need.

Stein praises the trackpad support, the 128GB of storage on the base model, the support for Wi-Fi 6, and the better onboard microphones, while listing as drawbacks that the device has the same design as the iPad Pro from two years ago, that he didn't find it notably faster and the cost with accessories has a chance to add up.

As for the AR sensor, Stein admits that he doesn't know quite what to make of it. He says it will be "amazing" for certain professionals, but goes on to call it "a specialized feature that most people won't need at all."

The iPad Pro can be ordered now from Apple's website.