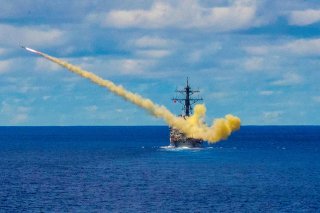 Stuck between an assertive China, a nuclearizing North Korea, and an increasingly unreliable United States, Japan is mulling the acquisition of strike capabilities. Its upcoming missile defense policy could destabilize East Asia. The United States must act.

While Americans are absorbed by the battle against coronavirus, street protests, violence, and the presidential campaign, the rest of the world is moving fast. In Japan, where Yoshihide Suga replaced Shinzo Abe as prime minister following the latter’s abrupt resignation, an upcoming revision of its missile defense policy raises the prospect of regional tensions, destabilization, and ultimately, conflict. Washington should pay close attention to this development and respond appropriately, or face long-lasting and serious consequences for its interests in the Asia-Pacific.

Since 1951 and the conclusion of the Mutual Security Treaty, Japan has relied on the alliance with the United States for security. By 1960 and the revision of the original treaty, Japanese parliament resolutions and government decisions had enshrined the principle of “exclusively defense-oriented policy.” The spear and shield alliance structure was born: the United States would use bases in Japan to protect its ally and project military power globally, while Japan would provide host nation support and focus on defending its own territory.

After the collapse of the Soviet Union, missile threats from North Korea and China rose to prominence. Japan faced the menace through the alliance. The country strove to build a missile defense system made of land-based and sea-based interceptors. The United States, in addition to helping Japan in its endeavor, maintained the offensive capabilities necessary to punish other countries for potential attacks on its ally. Deterrence was guaranteed by the combination of the Japanese shield and American spear.

Japan’s geostrategic situation has deteriorated significantly over the past few years. China has grown increasingly assertive and North Korea has continued to expand its nuclear and missile arsenals. Japan initially focused on reinforcing its shield against missile threats. In late 2017, a year marked by tensions between the United States and North Korea, Tokyo decided to introduce a new missile defense asset, the Aegis Ashore. In June of this year, however, the Japanese government suspended its deployment due to cost issues and safety concerns for local communities. This reversal triggered renewed debates about Japan’s missile defense policy, decisionmakers being aware that the current missile shield is inadequate to protect the country.

Although the option of strengthening the missile defense system further is still on the table, including through the construction of ships exclusively dedicated to this mission, an alternative is gaining momentum: the acquisition of strike capabilities. The ruling Liberal Democratic Party proposed in August to consider the “possession of the ability to intercept ballistic and other missiles even in the territory of an opponent.” And outgoing Prime Minister Abe, while not mentioning offensive capabilities, declared a few days ago that a new missile defense policy would be unveiled by the end of the year. Tokyo may not content itself with a shield anymore, it may want its own spear.

If Japan takes this path, the consequences for the stability of East Asia will be far-reaching. Given historical and political animosities between Japan and its neighbors, the acquisition of strike capabilities would raise tensions and the prospect of a regional arms race, with China in particular. Commenting on the possible introduction of ships solely dedicated to missile defense, China Daily, the mouthpiece of the Chinese Communist Party, said this “could trigger an arms race of missiles” and result in “regional peace and security [being] severely undermined.” One can only speculate about Beijing’s reaction to Tokyo’s purchase of offensive capabilities, but it is unlikely to be benign.

Another effect of Japan’s potential acquisition of strike capabilities concerns alliance dynamics with the United States. If the asymmetric spear and shield structure puts part of the burden of Japanese defense on the United States, leading President Donald Trump to describe the alliance as “unfair,” it also provides Washington with substantial control over Tokyo’s security policy and behavior, especially when it comes to offensive operations. From the American viewpoint, this reduces the risk of Japan acting recklessly. In case Japan obtains the capacity to autonomously attack an opponent’s territory, Washington’s ability to restrain Tokyo in its tense relations with neighboring countries will decline, raising the specter of entrapment.

The prospect of entrapment is even higher when one takes into account that wielding the spear demands expertise and experience. To forestall attacks or provocations with offensive capabilities does not only imply know-how in terms of military assets’ deployment, readiness and use, it also requires sending clear and timely signals to the intended audience about acceptable behaviors and redlines. This necessitates seamless cooperation at the highest level between the government, the ministry of defense and the ministry of foreign affairs. Japan has had no experience in handling offensive capabilities since 1945, and state institutions are still plagued by balkanization. Given the tense regional environment, the possibility of uncontrolled escalation cannot be ruled out.

What should the United States do? To answer, one needs to recognize that Tokyo’s intention to acquire strike capabilities for missile defense is puzzling because, within the alliance framework, the United States already contributes to the defense of Japan with such assets. Then, one ought to admit that this potential duplication of American forces would largely be explained by the fact that the United States is not the reliable ally it used to be.

Although structural factors dating back to the George W. Bush and Barack Obama eras enter the picture, Trump’s unpredictable and transactional diplomacy has pushed alliance uncertainty to new heights. His withdrawal from the Trans-Pacific Partnership in January 2017 as the first major decision of his presidency raised doubts about the United States’ engagement in the Asia-Pacific. The threat of tariffs on Japanese car imports to force Japan into a trade deal in late 2019, which arguably ran against Article II of the alliance, triggered distrust and resentment in Tokyo. And Mr. Trump’s alleged request for a fivefold increase in Japan’s host nation support gives Tokyo the impression that American soldiers are mere mercenaries, and thus that Japanese and American strategic interests diverge. When asked by The New York Times what would be his reaction if allies refused to share the burden of American troops’ presence on their territories, Trump replied: “Congratulations, you will be defending yourself.”

Washington has little control over the Chinese and North Korean components of Japan’s security equation. It can and should, however, reassure Japan about its security commitments. While  Suga’s decision to pick a novice defense minister in the person of Nobuo Kishi, Shinzo Abe’s younger brother, may indicate a low priority for security issues, American decision-makers have until the end of the year to make sure the new Japanese missile defense policy does not take the wrong path. The time is running out; urgent action is needed. Otherwise, the United States could wake up from the presidential election with another Asian headache.

Lionel P. Fatton is Assistant Professor of International Relations at Webster University Geneva. His research interests include international and security dynamics in the Asia-Pacific, China-Japan-U.S. relations and Japan’s defense policy. His latest book, Japan’s Awakening: Moving toward an Autonomous Security Policy, was published in 2019.