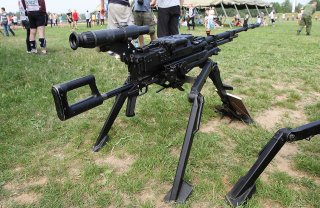 The United States military has employed the venerable M2 .50-caliber machine gun for nearly ninety years. That weapon is essentially a supersized version of the M1919 .30-caliber Browning machine gun, which was developed by the prolific firearms designer John Moses Browning.

Only a few nations have developed similar high-caliber machine guns, and among those is Russia's NSV "Utes," a machine gun that was first developed fifty years ago. Designed to replace the World War II-era DShK, the NSV entered service with the Soviet Army in 1971 and is now getting a new lease on life.

The Russian Ministry of Defense announced earlier this week that Russian servicemen in Tajikistan tested the newest models of Utes heavy machine guns for the first time. The weapon recently entered service with the motorized rifle units of the 201st Military Base.

"At the Lyaur mountain training ground, machine-gun crews practiced their skills in choosing and equipping firing positions," the defense ministry said in a statement. "On a specially equipped area of the terrain, the gunners performed exercises to destroy targets imitating armored vehicles, firing points and low-flying air targets of a mock enemy that appear at maximum firing ranges. During the training battle, the servicemen had to solve fire missions, as well as classify the targets that needed to be hit in the first place."

The 12.7x108mm heavy machine gun has seen use in more than a dozen conflicts around the world, including the Soviet-Afghan War, the Afghan Civil War, Lebanese Civil War, and the Iraq War. It is still fielded by various forces in the Syrian Civil War and the Yemeni Civil War.

The gas-operated, belt-fed machine gun has a rate of fire of seven hundred to eight hundred rounds per minute, and it has an effective range of two thousand meters against ground troops. It can also be used as an anti-aircraft machine gun with dedicated mounts and has a maximum effective range in that capacity of fifteen hundred meters. Its 12.7x108mm cartridge is capable of piercing light armor, and it can annihilate human targets. Specialty rounds including an armor-piercing incendiary, armor-piercing incendiary tracer, and incendiary instant-action MDZ can also be employed with the machine gun.

The NSV has the ability to mount a variety of optics for the effective use of the machine gun at different ranges and in varied environments. A modernized export version of the machine gun is also available in 12.7x99mm NATO (.50 BMG).

The “heavy” designation applies to more than just the caliber. The gun alone weighs around fifty-five pounds, and a fifty-round belt weapons an additional twenty-five pounds. The tripod assembly for the infantry model weighs in at ninety pounds – giving the complete system a weight of one hundred and seventy pounds.