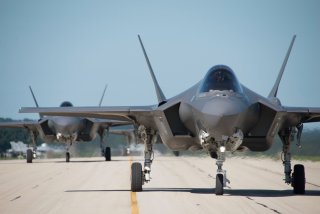 NATO countries will now be accelerating steps to increase their ability to quickly deploy forces in response to a crisis while improving interoperability through common command and control systems. The Russian attack on Ukraine has motivated NATO members to increase defense budgets, forward deploy additional forces, and heavily emphasize operational connectivity among allies.

NATO is rapidly evolving to adjust to a new status quo, requiring a much more aggressive stance when it comes to forward positioning assets and demonstrating readiness for war along its eastern flank.

“There are things that we can do and will do to make sure that it's a lot easier to rapidly-deploy forces forward. Some of those things include pre-positioning of equipment, putting forces that are at home stations on higher levels of alert, and streamlining command-and-control so that it's easier to fall in on a formation,” Austin said.

Interoperability and rapid deployment reinforce one another. The more a multinational force is able to share sensitive information in real-time using common standards, interfaces, or interoperable data links, the faster a NATO force can move into position and conduct joint multi-domain operations. Improving interoperability has been a long-standing challenge for NATO forces. Radio frequencies need to be aligned, computing protocols need to enable data exchanges, and datalinks between separate countries need to operate with interfaces to ensure information transmission.

Common command and control systems, fortified by uniform technical standards, can ensure NATO members are increasingly able to act seamlessly in warfare formations on the eastern flank. One clear advantage to this effort can be found in the F-35 stealth fighter, as the aircraft uses a common data link for all F-35s across multiple nations. The F-35s Multifunction Advanced Datalink (MADL) enables F-35s from any country to interact with and share information across a multinational formation of fifth-generation aircraft.

The alliance is likely working to move beyond this existing synergy and connect drones, aircraft, ground vehicles, and surface ships from multiple countries in real-time using a common framework. This would allow an F-35 from Poland to send targeting detail to U.S. Abrams tanks positioned to defend Finland or to NATO surface ships in the Baltic Sea trying to disrupt Russian maritime supply lines. NATO will likely seek to build upon the existing framework of its NATO Standardization Agreement 4586 (STANAG 4586) to enable drones from different countries to exchange information in a common format. STANAG 4586 could perhaps be upgraded to reduce latency, prevent hacking, or expanded to other platforms using compatible technical standards, message formats, and protocol.

NATO’s ability to rapidly respond relies to a large extent on the alliance’s capacity for common command and control and data exchange, or else forces from different member nations will be alienated from one another in combat environments. Given the number of breakthroughs the U.S. military is achieving with joint information networking, it makes sense that Austin would emphasize ongoing efforts to extend this kind of real-time connectivity among NATO members.