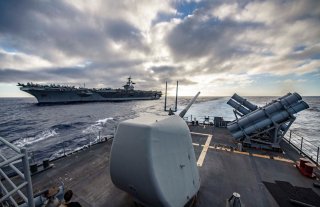 Here's What You Need To Know: This multi-beam integration is what helps facilitate the simultaneous tracking of several threats at once, as it can synthesize horizon scanning and precision tracking with wide-area volume search and Ballistic Missile Defense discrimination. Discrimination is of course a vital advantage associated with increased radar sensitivity, as it can discern threat objects from other less-relevant items such as friendly platforms or flying debris.

Multiple-track sensing and detection is expected to bring the desired radar detection strategy, as SPY-6 radars combine air-warfare and ballistic missile defense into a single system. When it comes to application, the SPY-6 radar systems streamline otherwise disparate fire-control and detection technologies; the SPY-6 can cue short-range, closer-in interceptors as well as longer-range ballistic missile interceptors such as an SM-3. This shortens the sensor-to-shooter time and offers war commanders a longer window with which to make decisions about which countermeasure is needed. This integration is precisely the kind of defense needed to counter a multi-pronged, coordinated enemy attack potentially combining ballistic missiles with cruise missiles, drone attacks...and more.

The SPY-6 family moves beyond existing AN/SPY-1 ship-integrated radar system and, according to an interesting essay in "Microwave Journal"..."handles 30 times more targets and has 30-times greater sensitivity than the SPY-1D(V).” (“Radar and Phased Array Breakthroughs,” Eli Booker)

Digital Beam Forming, according to Navy and Raytheon developers, can make multiple-track radar applications possible. An interesting essay in a publication called "RadarTutorial" explains how “multiple independent, narrow beams steered in all directions can be formed in the digital beamforming processor. This brings improved dynamic range controlling

This multi-beam integration is what helps facilitate the simultaneous tracking of several threats at once, as it can synthesize horizon scanning and precision tracking with wide-area volume search and Ballistic Missile Defense discrimination. Discrimination is, of course, a vital advantage associated with increased radar sensitivity, as it can discern threat objects from other less-relevant items such as friendly platforms or flying debris.

Alongside the SPY-6 (V)1, Raytheon and the Navy are now integrating several additional SPY-6 variants for carriers and amphibs, specifically tailored to their respective mission scopes. The SPY-6 (V) 2, for instance, is a smaller rotating radar and a SPY-6 (V) 3 has three fixed radar faces on the deckhouses. These variants will go on both Nimitz class and Ford-class carriers. The (V) 3 has nine radar module assemblies. The (V)3 has three fixed spaces looking out at a different angle, covering 360-degrees with 120-degree panels each. Finally, there is a SPY-6 (V)4 which will be integrated onto existing DDG 51 IIA destroyers during a mid-life upgrade. The (V) 4 has 24 Radar Module Assemblies, compared to the (V) 1, which has 37.

Osborn previously served at the Pentagon as a Highly Qualified Expert with the Office of the Assistant Secretary of the Army - Acquisition, Logistics& Technology. Osborn has also worked as an anchor and on-air military specialist at national TV networks. He has appeared as a guest military expert on Fox News, MSNBC, The Military Channel and The History Channel. He also has a Masters Degree in Comparative Literature from Columbia University. This article appeared last month.