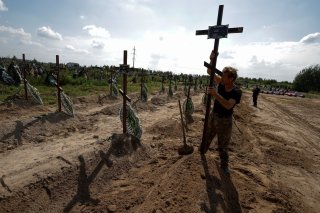 A new report published by Yale University Humanitarian Research Laboratory has revealed further evidence of Russia’s disturbing track record of atrocities and war crimes in Ukraine.  Carefully analyzed evidence of “disturbed earth” and “eyewitness” accounts of torture and murder paint an extremely grim picture of abuses committed by Russia and Russia-aligned forces during the processing of Ukrainian citizens and prisoners of war (POWs).

While much of this has already entered the public consciousness and provoked international investigations, the Yale report combines first-hand accounts with carefully analyzed imagery.

Extensive geospatial analysis of images and open-source investigations of additional evidence, the report states, reveal locations entirely consistent with the digging of mass graves. Citing “disturbed earth” at Volnovakha Correctional Colony, the Yale report identifies “two areas of disturbed earth present in the south and southwest sections of the Volnovakha Correctional Colony grounds. The disturbed earth in the Southwest corner of the facility is directly adjacent to the barracks where POWs are reportedly held.”

The Yale report further corroborates this finding by quoting an eyewitness testimonial translated from Ukrainian TV saying prisoners were “beaten” and that he was “forced to dig a mass grave.”

One item referenced in the report points to imagery captured on July 27, 2022, showing “eight parallel rows of disturbed earth averaging 16.29 meters in length and 2.71 meters in width.” To even the untrained human eye, this sounds like the ground contours were similar to what a human grave dug into the ground would look like.

The research, photographs and open-source analysis contained in the report appear to advance well beyond the now widely circulated anecdotal reports and eyewitness accounts of Russian war crimes and add critical depth, context, and credibility to the issue.

An experienced U.S. Air Force leader told The National Interest that he expects Russian president Vladimir Putin to wind up in the International Criminal Court for what seems to be a deliberate attempt to murder children, innocent civilians, hospital patients, and pregnant mothers.

“The Russians’ philosophy is not one that is concurrent with the laws of armed conflict, or the Geneva Convention,” said retired U.S. Air Force Lt. Gen. David Deptula, now dean of the Mitchell Institute for Aerospace Studies. “The actual statistics over the last two weeks is that the Russians have attacked hospitals in over eighteen circumstances. I’m here to tell you that I’m pretty certain that we’re going to see Vladimir Putin in front of the International Criminal Court and prosecuted not unlike (former Serbian president Slobodan) Milošević.”

Deptula was the principal attack planner for the Desert Storm coalition air campaign in 1991, and later director of the Combined Air Operations Center for Operation Enduring Freedom in Afghanistan in late 2001. Both campaigns were noted for their use of precision-guided munitions.