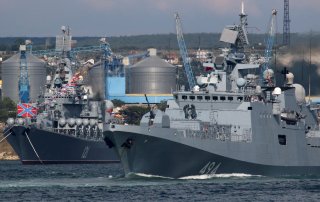 The Kremlin branded the United States and NATO as leading threats to Russia’s national security in a new naval doctrine signed by President Vladimir Putin on Sunday.

“Guided by this doctrine, the Russian Federation will firmly and resolutely defend its national interests in the world's oceans, and having sufficient maritime power will guarantee their security and protection,” read the fifty-five-page document.

The doctrine, published in full by the Kremlin on Sunday, outlined “the strategic policy of the USA to dominate the world's oceans” as one of the major threats confronting Russia, adding that the United States and its allies seek to limit Russia’s “access to the resources of the world ocean and vitally important maritime shipping routes.” The document expressed alarm over what it described as an uptick in NATO exercises conducted near Russian waters and the “expansion of NATO military infrastructure toward the borders of the Russian Federation.”

The document placed a newfound emphasis on maintaining Russian military readiness in the waters of the Northern Sea Route, a shipping route spanning Russia’s Arctic coast, and called for a permanent Russian naval presence in the Mediterranean. The doctrine announced the construction of a new shipbuilding facility in Russia’s far east, a ferry line to Kaliningrad, the further development of offshore pipeline systems, and additional investments into marine research programs.

Russia’s naval doctrine was last updated in 2015, shortly following the annexation of Crimea. Russian deputy prime minister Yury Borisov told reporters in May that Moscow was working on revising its naval doctrine to reflect “the new geopolitical and military strategic situation in the world.”  Borisov noted that “In the conditions of the collective West’s total hybrid war against our country, unprecedented sanctions and the conduct of a special military operation in Ukraine, it is more important than ever to ensure our security. It is vital for us to build up our capability to guarantee and protect our national interests in the oceans.”

“We openly outlined the borders and zones of Russia’s national interests,” he said in a brief address that made no mention of the ongoing war in Ukraine. Putin announced that deliveries of Russia’s 3M22 Tsirkon winged hypersonic anti-ship cruise missiles will begin “within the next month,” noting that the Admiral Gorshkov frigate will be the first vessel to carry the new missile.

"The key thing here is the capability of the Russian navy," Putin added. "It is able to respond with lightning speed to all who decide to infringe on our sovereignty and freedom."