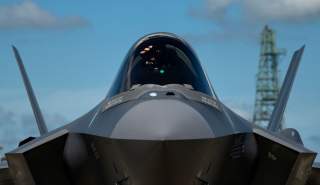 Key point: The F-35 needed a way to carry more missiles, but without interfering with its stealthy profile.

F-35 manufacturer Lockheed Martin says it has created a fix that solves one of the F-35’s biggest problems: not enough missiles.

To understand why this is important is to understand the trade-offs behind stealth technology. Stealth seeks to minimize the probability that an aircraft will be detected by radar, infrared or radio emissions sensors. One of the ways an aircraft can reduce its radar profile is through the shape of its fuselage, which why stealth planes like the F-35 and B-2 have that curvy, bat-like shape.

Older jets like the F-15 and F-16 look almost pregnant from all the ordnance hanging from their bellies and wings. But if the F-35 does that, it becomes more visible to radar. That’s why most unusually for a fighter, the F-35 has an internal bomb bay that keeps its payload safe from prying radar beams.

The problem is that like a closet in a small apartment, an internal bomb bay on a small aircraft like a fighter – as compared to a behemoth like a B-52 – can only store so many weapons. An F-35 can carry four AIM-120 radar-guided missiles, two apiece in each of two weapons racks in the bomb bay. A 1970s F-15 can haul eight missiles (Boeing’s F-15X, a potential F-35 competitor, has space for 16 missiles), while a Russian Su-35 fighter has space for up to a dozen weapons.

Those numbers are important because modern jets are increasingly becoming missile carriers, armed with long-range air-to-air and air-to-ground weapons (Russia has even armed its MiG-31 fighters with big hypersonic ballistic missiles). Aerial warfare may now resemble an archery contest, with fighters – and combat drones – launching volleys of missiles.

How this concept will actually play out in real combat remains to be seen. But it stands to reason that an aircraft that can carry more missiles will have an advantage. Interestingly, when the U.S. Air Force conducted its first combat mission with the F-35 last month, the fighters that struck ISIS positions in Iraq were carrying Joint Direct Attack Munition bombs on external pylons. Clearly, in a non-existent air defense environment like Iraq, the Air Force deemed it safe to sacrifice stealth.

Either way, expanding the F-35’s missile capacity from four to six weapons is a 50 percent increase. Which sounds impressive, though not as impressive as the 8 to 16 weapons carried by other fighters.