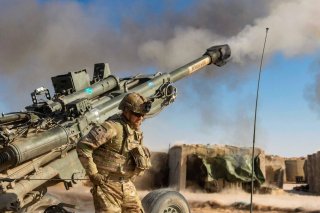 The Biden administration announced an additional $800 million in military aid to Ukraine on Wednesday.

Biden added that he approved the transfer of eleven Mi-17 helicopters earmarked for Afghanistan prior to the collapse of the U.S.-backed government in Kabul, according to Reuters. The U.S. aid package also includes 300 Switchblade drones. Pentagon spokesperson John Kirby said some of the equipment being provided to Ukraine, including the howitzers, Switchblade drones, and advanced counter-artillery radars, will require Ukrainian servicemen to be trained in Europe by their U.S. counterparts.

The latest U.S. arms package, which reportedly includes more than a dozen different items, was compiled on the basis of several conversations between U.S. and Ukrainian officials regarding what the Armed Forces of Ukraine (ZSU) need to fend off the ongoing Russian invasion. The new list expands the scope of U.S. lethal aid to Ukraine, marking the first time that howitzers were provided to Ukraine by Washington. The new aid will be funded under the so-called presidential drawdown authority, which allows the Biden administration to transfer U.S. arms into Ukraine without Congressional approval in response to an “unforeseen emergency.”

The package comes as the war enters into a new phase, with Russian forces preparing for a major offensive in Ukraine’s eastern Donbass region. Whereas the forested topography around the capital city of Kiev lent itself to Ukrainian small-scale ambush tactics, the fighting in Donbass will take place on flat, open terrain and involve larger mechanized formations. These conditions are expected to play to the strengths of the Russian military, which can draw on a far larger reserve of armored columns and artillery firepower than its Ukrainian counterpart. This new front will be closer not only to Russia’s borders but also to the breakaway Russian-aligned Donetsk and Luhansk People’s Republics (DNR and LPR) in Donbass, potentially alleviating some of the logistical strain that previously afflicted Russian forces near Kiev.

The latest tranche of U.S. aid to Ukraine is tailored to these challenging new circumstances, according to top officials. “It’s the first time that we’ve provided these [155mm] howitzers and the associated rounds, and that’s reflective of the kind of fighting that the Ukrainians are expecting to be faced with here in this more confined geographic area,” said Kirby. “They specifically asked for fire support, specifically for artillery.”