New From the U.S. Air Force: Swarms of “Smart” Bombs (And a Surprise) 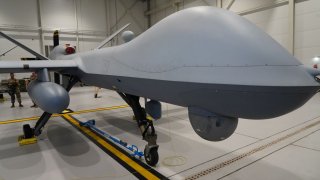 Picture this scenario: an Air Force pilot cruises towards the enemy. After acquiring a target, the pilot releases four miniature gliding bombs towards four predetermined targets. While in flight, two of the bombs detect higher value targets and readjust their flight profiles accordingly. All four bombs hit their targets—but without a pilot in the loop directing the munitions. Though not yet a reality, the Air Force hopes that this scenario could become possible in the near future via their Golden Horde program. But what is the Golden Horde?

The Air Force states that their Golden Horde will “integrate data link radios and collaborative behaviors on inventory weapon systems to demonstrate the mission effectiveness of networked collaborative weapon capabilities for our warfighters. This effort will validate an integrated system where different technologies work together to defeat targets.” Cutting through the jargon, the Golden Horde is essentially an effort to network different munitions together and give them the ability to independently choose targets.

Generally speaking, weapons that are networked together are able to coordinate their actions by sharing flight and targeting data. This data is then used to improve the mission success rate of the group of munitions (also called a swarm).

Autonomous but not Intelligent

Though the munitions would work autonomously, they would not operate using artificial intelligence. Instead, the munitions would work within a framework of rules that allows some decision making to be done by the swarm. Within this rules-based framework, semi-autonomous munitions can quickly respond to changes in the battlefield or changes to the rules of engagement—in real-time—for increased flexibility. Pre-mission programming could include primary and secondary target designations, though even more complex scenarios are possible to be programmed into the system.

Swarms of ammunition can be programmed with specific “playbooks” that allow swarms to flexibly call the shots, much like how plays in the game of football are chosen. The Air Force explained what this would look like for the Golden Horde, saying swarms would use a “collaborative autonomy approach referred to as ‘play calling.’ A ‘play’ is an established collaborative behavior enabled (or disabled) when certain predefined conditions are met by the swarm. Golden Horde uses a collection of plays called a Playbook. Loaded prior to the mission, the Playbook provides a choice of plays from which the weapons can choose.”

Two different types of munitions are being evaluated by the Golden Horde program, the Collaborative Small Diameter Bomb I (CSDB-I), and the Collaborative Miniature Air-Launched Decoy (CMALD). Both prongs of this effort are based on munitions that already exist — Raytheon’s Miniature Air-Launched Decoy, and Boeing’s Small Diameter Bomb. Upgrades to these two types of ammunition include upgraded computers for increased processing power and new radio systems for better information exchange between the munitions.

Though not exactly artificial intelligence, the Golden Horde explores the possibility of networked swarms of munitions that can make decisions by themselves. Though the munitions used by the Golden Horde program might not end up being their final iteration, whatever the program comes up with will likely give the Air Force a powerful new capability.