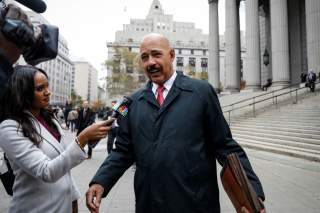 New York's attorney general has sustained an embarrassing defeat in the state's securities-fraud case against Exxon Mobil over its communications on climate change, a case that never should have been brought.

The case got off on the wrong foot from the start when since-disgraced NY AG Eric Schneiderman signaled that he wanted to use it as a vehicle against wrongful advocacy of bad public policy positions. I and others strongly criticized his moves to use subpoenas for that purpose, and editors at places like USA Today and the Washington Post were troubled by the likely chilling effects such tactics would have on advocacy, and the First Amendment implications of that.

At the last minute Schneiderman's successor as New York attorney general, Letitia James, dropped two counts that would have required a showing of intent by the oil company. That still left the state's elastic, ultra-broad Martin Act, which any defendant would have to fear: it gives the state's AG unusual powers that are hard to square with due process protection.

But even the Martin Act charges failed, for reasons foreshadowed by Prof. Merritt Fox in this Columbia Law School post. Over the course of the trial, Judge Barry Ostrager also chided the state -- to quote the New York Post's account -- "for being unprepared, for indulging in 'agonizing, repetitious questioning about documents that are not being disputed'; for pretending a witness was an expert when she wasn’t” and much more. This morning, in a scathing opinion, Judge Ostrager ruled that the state had not shown Exxon investors to have been misled. Unless the state is rash enough to appeal, that should be that for this misbegotten case.

The damage, however, is real. If a state like New York can bend and twist legal concepts like that of securities fraud to carry on an essentially political vendetta against a corporate enemy, how safe are other businesses? Not very, suggests Prof. John Baker.

This is not a question of one's views on climate, but of whether all sides, including businesses, ought to remain free participants in the arena of public discussion and advocacy. That's why it continues to surprise me that organizations that should know better bought into the premises of the New York suit.

This article by Walter Olson first appeared in CATO on December 10, 2019.