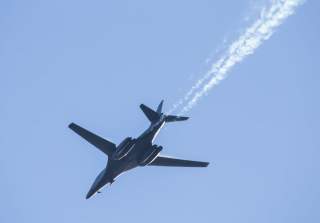 The B-1s will continue to support USPACOM in conducting routine, strategic deterrence and regional training missions.

Noteworthy this deployment is the first ever for the Block 16 B-1B.

“The Block 16 makes the B-1 an all-round more capable aircraft,” said Capt. Matt, 9th BS member. “With the upgrades, we are able to have a say in the fight and increase the connectivity between aircraft on a built-in network, making the B-1 more lethal, more deadly.”

This enhanced capability not only aids the crew of the B-1, but allows other military assets to be better prepared against enemy threats.

“The mission of the 9th Expeditionary Bomb Squadron on this deployment is to project combat airpower for U.S. Pacific Command and to work with our allies within the region,” said Maj. Eric, 7th Operation Support Squadron member. “They’ll fly a mixture of local training missions and power projection sorties, while also conducting coalition training to enhance the warfighting ability in the PACOM area of responsibility.”

7th BW Airmen have been training for several months by taking part in major large force exercises (LFEs) across the U.S. to prepare for this deployment.

“Every deployment and mission is different,” Maj. Eric said. “The importance of this mission—this deployment—is to project American airpower and work with our allies within PACOM. We’ll be training together and improving those relationships.”

This marks the second deployment of B-1s to Guam in over a decade. The first deployment of B-1s arrived in August 2016 and took over CBP operations from the B-52 Stratofortress bomber squadrons from Minot AFB, N.D., and Barksdale AFB, La.

The B-1s will continue to support USPACOM in conducting routine, strategic deterrence and regional training missions. Incorporating the B-1 into PACOM operations exercises the Air Force’s ability to integrate a unique capability with regional allies and partners in various parts of the world.

Since 2004, USAF bombers such as the B-1, B-52 Stratofortress and B-2 Spirit have been in continuous rotations providing non-stop stability and security in the Indo-Asia-Pacific region.

The B-1 units bring a unique perspective and years of repeated combat and operational experience from the Central Command theater to the Pacific. Moreover as a multi-role heavy bomber, the B-1 can fly more than 900 miles per hour and carry more than 75,000 pounds of munitions. In fact the aircraft will provide a significant rapid global strike capability that enables readiness and commitment to deterrence, offers assurance to the U.S. allies and strengthens regional security and stability in the region.