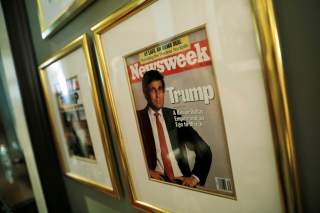 Newsweek demoted an editor who published an article saying that President Donald Trump would likely be tweeting and golfing on Thanksgiving.

“Newsweek investigated the failures that led to the publication of the inaccurate report that President Trump spent Thanksgiving tweeting and golfing rather than visiting troops in Afghanistan,” a Newsweek spokesman told the Daily Caller News Foundation Monday evening. “The story has been corrected, the reporter responsible was terminated and the editor was demoted.”

Newsweek did not name the editor responsible for publishing the article. The outlet did not give reasons why it punished the reporter and editor in different ways.

“We will continue to review our processes and, if required, take further action,” the statement continued. “From the start of her tenure as editor in chief of Newsweek, Nancy Cooper has moved the newsroom toward strong reporting, such as the scoop on [Islamic State leader Abu Bakr al-Baghdadi’s] killing, and away from knee-jerk political snarkiness. This story did not meet the standards she has set.”

The article was published at 10:16 a.m., a few hours before the public was made aware that the president traveled to Afghanistan. Reporters who traveled with the president were allowed to break the news around 2 p.m. on Thanksgiving, according to CNN.

Trump also concealed the trip to White House staff and military personnel who were at Mar-a-Lago in Florida, where the president has spent past holidays, CNN reported. Kwong cited his past years there in her original article.

Trump headed to Afghanistan to surprise U.S. troops on Thanksgiving https://t.co/f7Xeqz1ZGQ Deleting this tweet because it was written before knowing about the president’s surprise visit to Afghanistan-an honest mistake. Story has already been updated, as shown in the screenshot. pic.twitter.com/g9CfPaV2kQ

Kwong apologized on Twitter and called the report “an honest mistake” after the error came to light. It was heavily edited with additional information from another Newsweek journalist and included information from Trump’s surprise visit to the troops.

“This story has been substantially updated and edited at 6:17 pm EST to reflect the president’s surprise trip to Afghanistan. Additional reporting by James Crowley,” the updated article reads.