The Next China Threat: An Invasion of Taiwan? 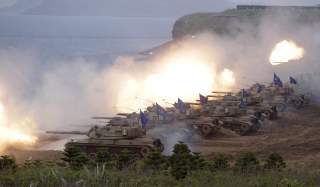 China’s preparation for invading the self-ruled island of 23 million people was the focus of a unique think tank conference appropriately held on Halloween.

Sponsored by the Washington-based Project 2049 Institute, “The Nightmare Scenario: The PLA Invasion Threat and Taiwan’s Response,” served-up macabre entrées of pre- and post-invasion settings from the early warning signs of a D-Day Minus 45-30 to a post-apocalyptic enslaved populace.

Richard Armitage, Project 2049’s Board Chairman, and former US Deputy Secretary of State, said Taiwan military planners now have to look at the China threat from a 360 degree perspective, not just looking west across the Taiwan Strait.

China might not have amphibious craft, but they have roll-on/roll-off, so no longer is an amphibious invasion assault on Taiwan unthinkable, he said.

“It is thinkable if you think about the specific situation of a quick lightning strike on the Taipei Port [Bali District] to establish a beachhead,” Armitage said. “What we are talking about is uncomfortable, unpleasant, and is a nightmare scenario, but we got to think this way and we have to come up with responses.”

Retired Adm. Richard Chen, of the Taiwan Navy, said that Taiwan was “facing tremendous pressure from the other side.”

Chen, former Vice Minister of Defense, said the military would have D-Day Minus 45-30 days warning before the Chinese hit the island. That is, if Taiwan’s early warning system worked without problems. The system has to be resilient enough to incorporate every single element of the sensors, shooters, and track every inboard missile, plane, and ship. “It has to generate a coherent picture shared with all three services that will reduce miscalculation.”

Such a miscalculation would mean that Taiwan failed to defeat them in the littoral waters, and if so, the real “nightmare scenario is that we are forced to annihilate the Chinese on the beachhead,” Chen said.

Retired USMC Gen. Wallace “Chip” Gregson said, “Geography and the 110 miles that separate the island of Taiwan is one factor” that works in Taipei’s favor, but the “numerical odds facing Taiwan are daunting.”

Still, Taiwan’s emerging advantage is the ability to defeat cruise and ballistic missiles in a very cost-effective manner, where our ‘bullets’ cost much less than the target it hits,” Gregson said.  A reference to Taiwan’s fielding of new PAC-3 Patriot anti-ballistic missile defense systems and the island’s analogous Tien Kung (Brave Wind) systems.

“Even with the best planned, equipped and integrated air-land-sea defense, it’s likely that the PRC [China] will achieve a foothold of some sort somewhere on the main island,” Gregson said.

This is where the “nightmare” begins. “At that point, the ability of Taiwan’s ground forces, fully supported and integrated with Taiwan’s air and sea forces, to maneuver, including amphibious maneuver, and to locate, close with and destroy enemy forces by fire and close combat (aka hand-to-hand fighting) will be essential.”​

Richard Fisher, a senior fellow of Asian military affairs at the International Assessment and Strategy Center, gave details of China’s military modernization effort. An effort that some Chinese leaders, including President Xi Jinping, have declared would result in the invasion of Taiwan in the 2020 timeframe.

Fisher said informal sea lift capabilities could mobilize an additional 8 to 12 Divisions or around 80-120,000 troops. There are also 104,000 self-propelled inland water barges used by commercial entities, many of which are roll-on/roll-off size barges. Using these platforms would require securing a port under hostile conditions.

However, Fisher warns that once China’s military secures Taoyuan Airport it could employ the 3,000 Boeing and Airbus airliners used for commercial traffic to transport troops and reinforcements. If used in full force, China could transport 1.6 million passengers to Taiwan per day.

Fisher also warned of a “Fifth Column” of pro-China supporters living in Taiwan that would support invasion forces.

Taiwan is not without options to counter the attack. It has fielded new weapons that will slow China’s invasion: the supersonic Hsiung Feng 3 (Brave Wind) anti-ship missile, Tien Kung 3 (Sky Bow), and Wan Chien air-to-ground missile. Taiwan is also upgrading its F-16 and Indigenous Defense Fighters, along with building a new fighter aircraft trainer.