The Next Frontier of Russo-American Competition: the Arctic 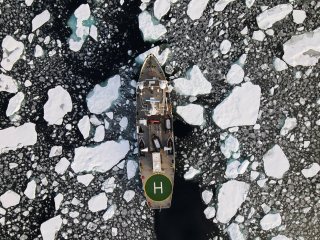 Beneath the frozen waters to the north of Alaska is a region with the potential to extend American territorial claims in the Arctic and to enrich the economy of the north with its entirely untapped resources—the Chukchi Plateau. Yet the United States has shown only minimal interest in the region, while competitors such as Russia expand their presence there. To obtain a better picture of the situation, it is first important to determine exactly what the region has to offer, what has been done so far, and how American interests can best be bolstered in this frozen frontier.

Located some two hundred miles north of Alaska, the Chukchi Plateau is a series of underwater ridges and rises that extends northward into the Arctic Ocean, beginning roughly halfway between Alaska and the Russian Far East. The region is itself interesting for two main reasons. First, as outlined in a report by the Department of the Interior, the area has the potential to play host to attractive petroleum generating regions, which could be of great value to whichever nation were to exploit them. Second, if a country were able to lay claim to the plateau by having it geologically recognized as an extension of its continental shelf, then under the United Nations Convention on the Law of the Sea (UNCLOS), that country would have exclusive rights to resource extraction in the area.

Currently, the United States has not made any formal claims to the region. By contrast, Russia demonstrates greater territorial ambitions, having raised claims in recent years. Furthermore, Moscow has made clear its intention and capability to defend such claims, as it has conducted a military buildup on Wrangel Island, the closest Russian territory to the plateau, stationing troops and air defense systems on the island.

The Russian claim relies upon scientific proof that the Chukchi Plateau region is an extension of the geology of eastern Siberia. However, the veracity of these claims is up for debate. Recently, geologic studies conducted through the University of Alaska Anchorage have shown that the United States may have a more favorable claim, as the region is likely more closely related in its geology to the North American continent than Siberia, having possibly split off from northern Alaska some millions of years ago.

Given this, the need for Washington to develop a coherent policy with regard to the Chukchi Plateau becomes apparent. To that end, the forthcoming Biden administration should do two things: strengthen both U.S. Coast Guard and Naval presence in Alaska and expand research efforts in the region.

The current presence of the Coast Guard in Alaska is serviceable for now, but as the Arctic grows increasingly more navigable with the melting of its ice, traffic through the region will be sure to increase. With this in mind, a bolstered presence in Alaska now will help to ensure the security of the region for future oceangoing vessels. The necessary infrastructure to support such takes time to build, and a country that has a head start today will be more prepared tomorrow. Russia already has such a head start, as evidenced by its naval presence in the region and its base on Wrangel Island. Should the United States wish to one day contest Russia’s claims to the plateau, that would be more easily accomplished if Russia were unable to respond that American claims were derelict due to lack of activity.

As for the United States establishing its own claims, two things are of importance. Firstly, Washington should strongly consider opening direct negotiations with Moscow in order to reach a peaceful and mutually agreeable end to any territorial disputes before they begin. Direct negotiations with the Russian government on equal terms will help to allay fears of potential conflict and help to ensure a stable and more prosperous arrangement for all parties.

Second, the United States should act to increase its commitment to scientifically proving the viability of its potential claim. Currently, the University of Alaska Anchorage is able to organize only occasional mapping expeditions to this notoriously ice-packed region. To this end, additional ice breakers should be employed by the United States. Work to that end already seems to be underway, as a memorandum on polar security issued by the Trump administration highlights. An effective policy in this regard should be continued by the forthcoming Biden administration. Russia has spent many years hard at work expanding its own fleet of Arctic-going vessels.

As our world becomes increasingly warmer, and as the once impenetrable Arctic Ocean opens up to traffic, ensuring American security in the region and exploring the area’s resource potential should be a cornerstone of any policy with an eye looking to the future. As a recent article by Nick Solheim of the Wallace Institute for Arctic Security very clearly lays out, the Biden administration is at risk of falling short of this goal and should make developing a sound and clear Arctic policy one of its main priorities. In doing so, the administration could not only build on what has come before, but show its capability for innovation in this oft-forgotten area of American interest.

Brandon Walls is an undergraduate at the University of California, Davis.