The Next Threat to the Stealth F-35? Global Warming. 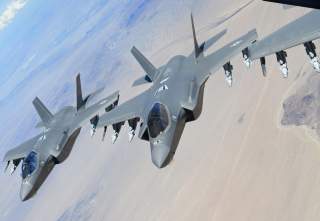 Norwegian environmentalists are complaining that the country’s new F-35s, which will replace Norway’s aging fleet of F-16 fighters, will generate too many greenhouse gases.

Higher fuel consumption translates into greater carbon dioxide (CO2) emissions, which are thought to contribute to climate change and rising global temperatures. This puts the Norwegian government in a dilemma: even though Norway has been at the forefront of environmentalism, carbon generated by its military is expected to grow sharply, in large part because of the Norwegian Air Force.

Norway’s military is working hard to reduce the F-35’s carbon footprint. “The defense sector is phasing out fossil oil for heating to reduce greenhouse gas emissions,” said Ministry of Defense official Lars Gjemble. “When it comes to our new fighter planes, it is planned that as much as possible of the operational training with the F-35 should take place in a simulator. Measured as a proportion of pure operational training with the F-35, the expected proportion of simulator training in the future is estimated at about 40 percent. This is significantly higher than for the F-16.”

Norwegian environmentalists are not reassured. “The purchase of 52 new fighter jets nullifies the effect of all other climate measures in the armed forces and ensures that emissions increase sharply,” said one activist. “The armed forces' emissions show that they too must carry out emissions cuts as the rest of society must.”

Per-Willy Amundsen, a former Justice Minister and a member of the libertarian Progress Party, dismissed these concerns. The Progress Party “believes that our defense capabilities should be given priority first. Unless the climate fanatics want to shut down the armed forces, then they can come up with constructive suggestions on how to reduce emissions as much as possible, without compromising defense capabilities,” he told Dagsavisen.

Amundsen argues that even with the F-35, Norway’s military will only generate an infinitesimal fraction of global CO2 output. “If we put these figures in perspective, we know that Norway accounts for about 0.14 per cent of the world's global greenhouse gas emissions. Defense accounts for 0.45 percent of Norway's total emissions. The expected increase in emissions from Norway's defense will then amount to about 0.00022 percent of global greenhouse gas emissions, based on today's emission figures.”

Indeed, nuclear-powered aircraft and missiles were considered in the 1950s – before the idea was dropped like a radioactive potato. Today, Russia’s Petrel – a low-altitude, nuclear-powered cruise missile – is widely derided in Western circles as a radiation-spewing freak.

It is not surprising that a 21st Century F-35 has a more powerful engine than a 1970s-era F-16, or that one tradeoff is increased carbon emissions. When factors such as engine power and fuel consumption are key to usefulness and survival of modern combat jets, environmental quality isn’t like to be priority one.

Despite numerous performance and financial woes of the stealth fighter, it’s unlikely that global warming will be the bullet that slays the trillion-dollar F-35 project, which includes more than a dozen nations. Advocates of strong defense spending are the least likely of any ideological group to sacrifice a major military project on the altar of global warming.