The Next Trump Bombshell To Drop: The Justice Department's 2016 Trump Campaign Report 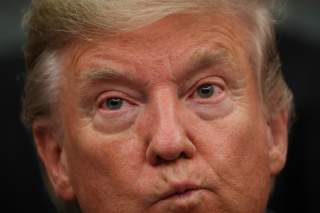 An internal watchdog’s report on Justice Department surveillance of President Donald Trump’s 2016 campaign is slated to arrive in early December—about the same time as a likely House vote on whether to impeach the president.

“Now what you’re going to see, I predict, will be perhaps the biggest scandal in the history of our country,” Trump said Friday of the pending report from the Justice Department’s inspector general.

Trump commented on the expected report and House Democrats’ impeachment inquiry in a phone interview with “Fox & Friends.”

Here is what’s known about what will happen next.

The report from Justice Department Inspector General Michael Horowitz on the FBI’s actions in obtaining a warrant under the Foreign Intelligence Surveillance Act, or FISA, to spy on Trump campaign aide Carter Page will be released Dec. 9. Horowitz is scheduled to testify two days later before the Senate Judiciary Committee.

The inpector general’s investigation reportedly will conclude that an FBI lawyer wrongfully altered an email regarding the application for the FISA warrant. The lawyer previously had expressed a strong anti-Trump bias, according to news reports.

However, these news reports say, Horowitz determined that there were proper legal grounds to seek the FISA warrant.

2. Who Is Kevin Clinesmith?

The FBI lawyer in question reportedly is Kevin Clinesmith, who was identified as “Attorney 2” in the June 2018 inspector general’s report about the FBI investigation of Hillary Clinton’s use of a private email server to do official business as secretary of state.

The coming report is expected to conclude that Clinesmith altered an email message that he received from another federal official. The report is expected to say that the FBI lawyer sent the altered message to supervisors who were working to obtain the FISA warrant, without informing them of the changes he made.

After Trump won the 2016 presidential election, Clinesmith sent a text message saying he was “just devastated,” and that “it’s just hard not to feel like the FBI caused some of this,” according to the previous inspector general’s report regarding the Clinton email probe.

Clinesmith’s texts apparently were referring to the FBI’s brief reopening of its email investigation weeks before Election Day.

“I am so stressed about what I could have done differently,” he also says in a text message.

In another message, Clinesmith wrote of Trump: “This is the tea party on steroids. And the GOP is going to be lost, they have to deal with an incumbent in 4 years. We have to fight this again. Also [Vice President Mike] Pence is stupid.”

The IG report referred to the sender of these texts as “Attorney 2,” but he is widely reported to be Clinesmith.

At the time, Clinesmith said he only was expressing his personal views, which he said did not affect his work.

Clinesmith was part of special counsel Robert Mueller’s legal team investigating a potential conspiracy between the Trump presidential campaign and the Russian government to influence the 2016 election. The probe found no evidence of conspiracy.

Clinesmith worked for the FBI’s National Security Branch, reporting to then-General Counsel James A. Baker, who also came under scrutiny for sharing classified information with the media. Baker was replaced and reassigned in December 2017, then resigned from the FBI in May 2018.

Baker reportedly met with a lawyer from Perkins Coie, the Seattle-based law firm representing the Democratic National Committee during the 2016 election cycle.

3. How Does IG Report Affect Impeachment?

The IG report doesn’t have any legal connection with House Democrats’ impeachment inquiry.

The lawmakers accuse Trump of pressuring the Ukraine government to investigate former Vice President Joe Biden and his son Hunter Biden in exchange for $391 million in congressionally approved military assistance.

However, the report due Dec. 9 could tie into a larger political narrative, said Peter Flaherty, president of the National Legal and Policy Center, a government watchdog group.

“I don’t know exactly what to expect from the IG report, and I expect we’ll learn more,” Flaherty told The Daily Signal. “It does appear it will be critical of the anti-Trump sentiment in the DOJ and will help balance the debate.”

“The IG report is a vehicle for information that Adam Schiff does not want to talk about,” he said, referring to the California Democrat who is House Speaker Nancy Pelosi’s point man on impeachment as chairman of the House Permanent Select Committee on Intelligence.

Some Trump defenders contend that many of the allegations of the impeachment inquiry involve appointed State Department and intelligence officials having a policy disagreement with the president.

The IG report could buttress accounts of a bureaucratic push against Trump by appointed Justice Department officials during the campaign and after the election, said Curt Levey, a constitutional lawyer and president of the Committee for Justice, a conservative legal group.

“Even if the IG report demonstrates many felonies from inside the Justice Department, it doesn’t have anything to do with the impeachment investigation of Trump,” Levey told The Daily Signal. “What it could do is tie into a broader skepticism of the entire Trump impeachment process, and the perceptions it’s about getting Trump.”

While the IG’s findings could have at best an indirect political effect on the Democrats’ impeachment inquiry, they directly affect U.S. Attorney for Connecticut John Durham’s criminal investigation into government surveillance of the Trump campaign.

As inspector general, Horowitz cannot bring criminal charges or issue subpoenas. Durham, who has a reputation for being a tough prosecutor in public corruption cases, can do both.

“Will the IG report show there was a major law enforcement effort to stop Trump? Was it illegal?” Levey said. “There is a lot of activity that is horrible, such as the Peter Strzok-Lisa Page texts. It was fireable, but it wasn’t illegal. With the FISA court, it depends. We might find something shocking, but [that] isn’t actually illegal.”

Levey noted that many investigations that are hyped—such as the Mueller probe—turned out to be duds.

Regardless of that, both sides should be concerned that federal law enforcement could be motivated by politics and attempt to influence an election, Flaherty said.

“It remains to be seen whether Horowitz’s testimony will be a general tongue-lashing or lead to indictments for wrongdoing,” Flaherty said.

Flaherty said he anticipates that Durham, in the ongoing criminal probe, will bring charges for making false statements to investigators and obstructing justice.

“I don’t think Durham will issue a report,” Flaherty said. “If we are going to see a narrative, it will come in the form of indictments.”

This article appeared in the Daily Signal on November 25, 2019.